Will Rye Merge with Port Chester? Ready for Muni M&A?

Do you want to be protected by a police force from Mamaroneck? Firemen from Portchester? Do you want your garbage and recycling carted away by Rye Brook? And what is Rye Town anyway and how is that different than Rye City? 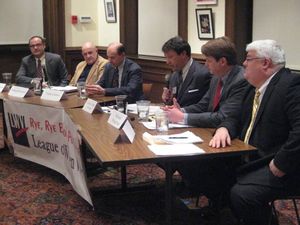 Are you ready to share services and play nice with our muni neighbors or do you think, no thanks, mind your own store? Leave a comment below.

Here is the report from the LWV:

The event was well attended by local elected officials, both past and present, and by residents from throughout Westchester.  State Senator Suzi Oppenheimer, Port Chester Mayor Dennis Pilla, Town of Rye Supervisor Joe Carvin, Rye Mayor Doug French and County Legislator Judy Myers were just a few of the officials in attendance.  Assemblyman Latimer set the tone by putting the night’s topic into context.  “If you have moved to this area what you notice is how illogical it all seems” Latimer posited.  He went on to say, “The Village of Port Chester looks more like a city and the City of Rye looks more like a village.  It’s a crazy quilt pattern.  The question is, how do we manage towns and villages incorporated in the early 1800’s but that are dealing with 21st century problems?”

The League of Women Voters – Rye, Rye Brook & Port Chester convened the forum to increase the public’s understanding of the pros and cons associated with this complex, and often controversial, topic.  Indeed, proposals concerning eliminating redundant functions and streamlining government are being debated with renewed urgency throughout the state.  The League agreed that the time was ripe for a public discussion amid growing public concern over the need to reduce tax burdens and enhance the efficiency with which government serves our community.  Debbie Reisner, president of this chapter of the League offered, “It is our hope that through this discussion, the public will gain the tools they need when evaluating the proposals that will soon be coming from policy makers at every level of government up through New York State.”

State Senator Oppenheimer said, ‘Let us look at smaller services that can be provided – back office services such as payroll, accounting, bulk purchases, and health insurance.  A lot more can be done, it comes down to good savings through common sense approaches.”

The discussion raised its share of controversial topics.  City of Rye Manager, Frank Culross talked about how the real savings are in consolidating police and fire services but that these are “the most politically sensitive”.  He went on to say that, “most people like their local service.”  Chris Bradbury, Village Administrator for the Village of Rye Brook, talked about how “building public consensus is of vital importance.”

Bishop Nowotnik, Confidential Secretary to the Supervisor of the Town of Rye, said, “In the business world, when there are inefficiencies, the company either goes bankrupt, is acquired by a larger, albeit more efficient company or changes its ways.”  That, he stated, “doesn’t happen in government.  Governments must go back to the taxpayers until there is some outside force to create change.”  He added, “A recent New York State law that eases the way for consolidation has the beginnings of doing just that.”