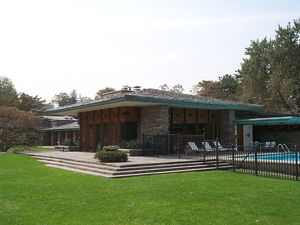 Tucked away on Rye's Island Drive, the gated community on North Manursing Island, is the Max Hoffman House.

Hoffman, a famous automobile importer that socialized European imports to the US market, commissioned Frank Lloyd Wright to build the house in the 1950s (he also had Wright design his Park Avenue showroom for his Jaguar dealership, one of the many European brands he was responsible for bringing to the US).

A 1987 article in The New York Times describes Hoffman and the house:

"But the name of the one man who perhaps did the most to bring foreign cars to the United States after World War II never made it to chrome fender badges. Maximilian E. Hoffman, who helped introduce American drivers to European marques like Alfa Romeo, BMW, Fiat, Healey, Jaguar, Mercedes-Benz, MG, Porsche and Volkswagen, was known to few.

Called by colleagues “the Duveen of the motor business,” Hoffman was compared to the legendary art dealer of the early 20th century for his ability to captivate clients with his salesmanship, superb taste and forceful personality. Equally known for his directness and penchant for perfection, his market acumen was not limited to cars: He appreciated great architecture, commissioning a landmark auto showroom on Park Avenue — and soon after, a home in Rye, N.Y., by Frank Lloyd Wright. He was also a collector of Impressionist art."

The house is currently owned by Tom and Alice Tisch (Tom is the son of the deceased billionaire businessman Laurence Tisch). Zillow lists its value at $2.5 million and it annual property taxes at $150,000.

What other homes in Rye do you know that have outstanding architectural value? Leave a comment below.