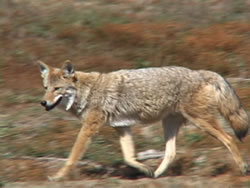 (PHOTO: Exactly how do you mix this up with a cat?)

MyRye.com checked in with Rye City officials to see how they were doing fending off coyotes and the New York media (down television camera man, I said down…). Ah for the days of a petty larceny…

No news is good news. We heard from Commish Connors who reported:

"There is really nothing new to report. We have had a number of sightings; some were cases of mistaken identity (raccoons, a cat, an opossum), and several were actual coyotes. We responded to each sighting and conducted several searches, but have not been successful in hunting or trapping as of yet

Cooperation and assistance from the County and DEC has been great. I attended a meeting on Friday with representatives of DEC, the County, and other agencies to review current issues and begin discussion of a long-term approach."

A cat? Identify yourself, I mean really. You need a pair of glasses before the Rye PD starts getting calls about squirrels.