The Lighter Side of VolunTraveling 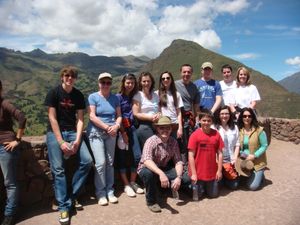 You know those groups that you see at the airport…the ones that hold up the line, have matching t-shirts, and have MANY suitcases? Well we  — the 13 people on the inaugural VolunTravel trip to Peru – were those people.  VolunTravel is a non-profit volunteer travel organization started by Rye Middle School teacher, Craig Dreves. My family, along with members of three other local Rye families, and led by Mr. Dreves, began our Peruvian adventure on Friday, April 15th, and returned Saturday, April 23rd. On the trip, we volunteered at an orphanage for three days, and then took in classic Incan sights, including Machu Picchu, for three days.  But the ridiculous scene at the airline check-in counter marked the beginning of an entertaining journey.

During our trip, we volunteered at an orphanage called Casa De Milagros, which means House of Miracles.  We worked with the kids for three days, teaching them how to bake American foods such as smores and brownies, playing various sports and painting a friendship tree on a wall where the leaves were the handprints of the kids and volunteers.

After a fun-filled three days, we continued on our way to see the Incan sights of Ollantaytambo, Sacsayhuaman (pronounced very similarly to sexy-woman…), Pisac, Cusco (not Costco) and Qenko.  The crowning glory was to be Machu Picchu, for which we had to wake up at 4 am to catch the bus there.  From Machu Picchu we hiked to a higher mountain called Huayna Picchu, where we could look down out at Machu Picchu and the surrounding sights.  We got there early enough to see the clouds part, and it was an incredible sight to see Machu Picchu appear almost out of thin air!  However, this trip did not unfold without a hitch….

For example, upon seeing the mini bus waiting for us at the Cusco airport, we began to wonder how we were going to fit 26 bags on top, plus 13 people and their carry-ons, the driver, and the tour guide all inside…To be honest, I still don’t know how we did it!  The ride was a bit squishy, but it was a great ice-breaker and we rolled with the punches.  The next “challenge” was discovering that to get to our hotel, the “road” that was there was really only a dirt trail filled with holes and large rocks covered by wooden boards.  Quite bumpy, especially in our squishy bus. 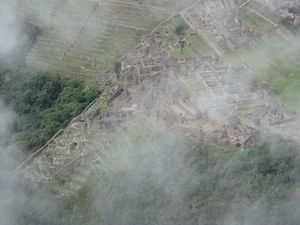 Sizing up our accommodation – a yoga retreat house affiliated with the orphanage — provided us with the next “interesting” moment.   The site had a main house and several huts and cabins.  We were shocked to find out that our only source of electricity-or heat- was in the main house.  The individual huts we were staying in had only candles and wood stoves.  Even more “interesting” was that the bathrooms, showers, and sinks were in a separate outdoor bathhouse, and by the way, in Peru, don’t make the mistake of throwing toilet paper in the toilet.  It goes in a separate garbage can nearby.  Right.

But, we stayed on the positive side, and again, rolled with the punches.   We decided that we would go for a little hike the day we arrived to get acclimated to the change in elevation (sea level to over 7,000 feet) and to stretch our feet.  As we were about to descend from the top, several large, horned cows started coming down the path right behind two of our group members.  After an initial moment of fear, we came to our senses, and told the group members to return and let the cows pass.  We all felt VERY ridiculous when we realized that the cows that completely intimidated us, were being led by a boy who looked to be about 6 and was playing with his toy car.

Another night, while we were in our huts, I heard a scream from our neighboring hut.  It turned out there was a tarantula on their wall.  Dreves, staying calm, said it was a baby one, but all of us remained wary of invading tarantulas.  We also met a cat there that had a tendency to appear out of nowhere and scare you half to death! Kit Kat managed to torment everyone on our nightly walks to our huts.

The inability of most of us to speak anything resembling decent Spanish was a great source of frustration and laughter.  Mr. Dreves and a couple of others were reasonably fluent, but it was a challenge for everyone else.  One of our group members tried to tell the kids to take care around the smores campfire, and said “Te quiero” meaning “take care-o”, but ended up saying “I love you” indirectly…whoops!  Another member of our group tried to say, “waiter!” and ended up calling the waiter “rocking chair!”  But, we all had a good laugh, and realized it was part of the experience.

To be able to get to Machu Picchu early, we moved to a hotel in Aguas Calientes, a town closer to the sight.  While checking in, we discovered that our hotel was 1 room short. That led to one of our group members staying in the receptionist’s personal apartment.  Don’t worry, she went elsewhere, but the pictures of her grandchildren surrounded him the whole night. The next morning, we woke up at 4 AM to catch one of the first buses to Machu Picchu.  We met up with our guide, who assured us that there was no need actually to wait on line for the bus because he had a friend that would get us on one of the very first buses so that we get tickets to hike Huayna Picchu (only the first 400 visitors may go).  While we waited for him to work his magic we saw several of the first buses depart.  All at once, however, he instructed us to sprint down the street to a nearby hotel, and off the 13 of us ran.  The next thing we knew the Machu Picchu bus stopped to pick us up.  What a relief!   After we arrived at Machu Picchu our guide disappeared for a moment only to tell us later that we did not get the Huayna Picchu tickets — but not to worry because he had a friend that would get us onto the Huayna Picchu hike.  Again several people entered the hike and we waited wondering whether this would work out.  Finally, we again got “the signal” and went through the gate to Huayna Picchu.  While hiking, we were all huffing and puffing and we were stuck wondering whether we were really that unfit, or if it was the altitude…Everything worked out well in the end, but we certainly rolled with the punches to get there.

We thought we would catch a nap or just relax on our train ride back from Machu Picchu to Cusco, but instead we got a fashion show!  Apparently, the train company was selling Alpaca products, and figured that the best way to sell the clothing was to have our mild mannered conductors model it!  One minute our conductor is serving us our snacks, the next minute he is sashaying down the isle in an Alpaca sweater!

For our last night in Cusco, we had planned a fiesta night, complete with Incan dancing, at a local restaurant.  Our first impression of the place wasn’t that great, but it turned into a fabulous night, complete with audience participation!  One member of our group was invited on stage to join in their fire dance.  The dancers wore a belt with a piece of toilet paper attached to the front and back.  The goal was to light the paper on fire.  But it was difficult because the dancers had to keep shaking their hips.  After trying to light the dancer’s rear on fire, the roles were reversed, and suddenly our group member was the one sashaying around the stage!  It truly was a sight to see and he was such a good sport!

The other eventful point about this dinner was that we all got to try the local specialty — guinea pig.  We weren’t the biggest fans but we were quite brave. In other places along the trip, we had tried llama and alpaca, which were milder tasting.

On our way home we had three connections to make.  Our second connection was late, and we were worried that we were going to miss our flight.  So, as soon as we got off the plane, we started running through security and moving as fast as we could.  Once we got to the gate, and asked the flight attendant whether we were too late, she said that the flight that we were just on was the flight going to New York.  Basically, we were on the flight already and ran around the airport for nothing!

However, I don’t want to paint the wrong picture; it was a terrific trip.  The mishaps weren’t that bad and we all had an unforgettable trip.  The sights were amazing, and the kids were great, but the icing on the cake was traveling with a great group of people who all brought different qualities to the trip, and all rolled with the punches!  The trip was something that I will never forget, and it truly was an INCA-redible trip.

Jacqueline Beveridge is currently an eighth grader at Rye Middle School. She moved to Rye in 2007 after living in England for nearly ten years. Jacqueline enjoys reading, writing, traveling with her family and hiking.

Facebook
Twitter
Email
Previous articleSchool Budget: Where to Vote on Tuesday, May 17th
Next articleRye’s Jarden Corp Batted Around