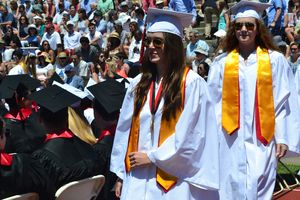 On June 21, the 83rd Annual Graduation Ceremony was held on the field outside of Rye High School. Rye City School District Board of Education Members, Administrators, and residents gathered to celebrate the graduating students for successfully concluding their high school education and embarking on steps for the future.

In continuing Rye tradition, the seniors entered the field to the tune of “Pomp and Circumstance” and took their seats in front of the bleachers. The Pledge of Allegiance and Star Spangled Banner were recited, and Principal Patricia Taylor welcomed all in attendance. 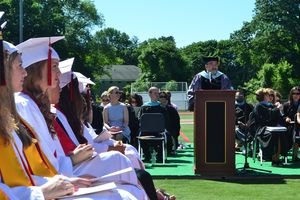 Superintendent of Schools Dr. Frank Alvarez provided remarks as well. He described the accomplishments earned by members of the senior class and shared a quote from astronaut Buzz Aldrin: “No dream is too high for those with their eyes in the sky.” He went on to say,“I hope that you will take all of the experiences afforded to you here at Rye High School and that you will channel them into fulfilling your dreams. To keep your eyes in the sky in the wonderment of all that is possible and of all you can achieve.” 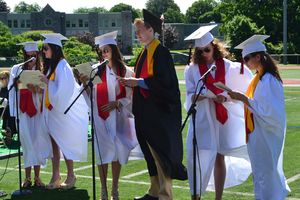 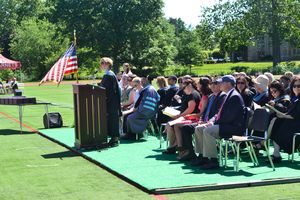 Valedictorian Samantha Carter and Salutatorian Olivia Iles addressed their classmates and guests as well. They each provided words of inspiration for their peers and reflected on impactful moments during their time in the District. Samantha discussed uncertainty and the prospect of opportunity that it holds. “It is okay not to know all the answers because that is what makes life exciting,” she stated. She also quoted the New York Rangers coach, relating the team’s efforts during the Stanley Cup playoffs to the senior class and its ability to work together as a team. Olivia focused on the importance of living with purpose. “We must be able to identify what we really want,” she stated. “We will have to live with purpose.” She suggested to her classmates, “Don’t lose yourself in the game or trying to stay out of the game. Forge your own path.”

Mrs. Taylor shared information about the Class of 2014, citing many awards and achievements that were earned by students in the areas of academics, athletics, the arts, and much more. She announced that 98% of the class will be attending 101 different colleges in 28 states and six countries. She also noted that each student completed an average of 143 community service hours. Mrs. Taylor additionally described the good character that this class exemplified. “Small acts of kindness can achieve great results,” she stated.

Board of Education Vice President Katy Keohane Glassberg offered remarks as well. She thanked the parents, staff, and other members of the Rye community for their support of the students and District. Mrs. Glassberg told the students, “We as a community stand behind you, we are proud of you, we are confident in you.” She then shared three pieces of advice from the Board of Education. “First, decide on a role model and get a mentor,” Mrs. Glassberg suggested. The second point was, “It is okay not to have decided who/what you’ll be when you grow up at the age of 18. Have courage and know you’ll get there.” The Board’s final recommendation was simply, “When you get up in the morning, make sure you make your bed.” “You’ll have accomplished something,” Mrs. Glassberg explained. “It will encourage you to do another task.”

It was then time for the moment everyone had been awaiting – the presentation of diplomas. Each senior was called up to accept his/her acknowledgment of high school completion, cheered on by the applause of family members, neighbors, and friends in the stands. The ceremony concluded with a recessional presented by the school band, and a reception sponsored by the Parents’ Organization was held in the Middle School Multi-Purpose Room.