The Jay House and the Great September Gale 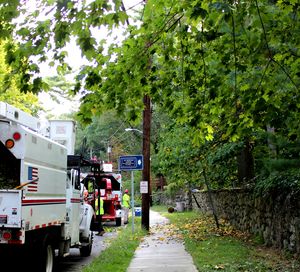 Suzanne Clary over at the Jay Heritage Center sent over this piece of history today:

Today is the anniversary of the "Great September Gale" also known as the "Norfolk and Long Island Hurricane of 1821." (How often would we call a hurricane "a gale" today? How many kids who've seen "Wicked" on Broadway would get Frank Baum's play on words that Dorothy's last name was synonymous with the cyclone that carried her off to OZ?)

Well on September 3, 1821, sustained winds estimated by some to be 135 miles per hour cannonballed into New England. A rapid storm surge of 13 feet in 1 hour was observed and water flooded Manhattan from the Battery to Canal Street – a record which stood unbroken until Hurricane Sandy. The aftermath of this sobering event fascinated Connecticut resident William C. Redfield. A pioneer in the study of hurricanes, and a man known for taking very long walks (he once trekked from New York to Ohio on foot) he followed the horrific trail of downed trees in his home state. He noted the directions in which the ancient green giants had toppled and came up with the earliest model of the circular or whirlwind nature of these weather systems.

Trees in Rye were not spared from this awesome display of Mother Nature’s power.

One of John Jay’s daughters, Ann wrote from Rye during the disaster.

This tremendous storm is making sad ravages with the beautiful old trees here – all or nearly all have fallen that were round the house. But neither the roof or windows [of the Locusts] have been broken. I rejoice on account of Aunt & Effie that we did not return home this morning. They were both very much alarmed & watched the fine old trees in painful suspense. Indeed it is a relief to know that they are down since there was no way they could weather the storm….If brother Wm can spare time, would it not be well for him to come here and supervise the raising of the trees if that be practical….Effie wishes to know in case brother Wm cannot come, if the trees should be much trimmed.”

In a letter the next day, Ann’s sister wrote from the Jays’ Bedford home describing the events there and characterizing the storm as “the war of elements.” Though some of the landmark trees at the Jays’ Rye home were undoubtedly raised, many could not be saved. In 1822, Peter Augustus Jay would eventually replant elm trees in the place of the locust trees of his father’s childhood.

The legacy of this disaster 193 years later has led to advances in environmental stewardship and storm preparedness. This includes maintaining our finest specimen trees. At the JayHeritageCenter we are carefully removing heavy vines from ashes, sugar maples and lindens.  Con Edison’s tree crews are also out this week pruning limbs back from wires. These wise practices should keep all of us and many of our “beautiful old trees” a little bit safer from the gales of the future.