Rye High Sports: There’s An App for That

The Rye High School Athletic Department has created a simplified way to track all Rye High School and Middle School athletic contests. The “Rye Garnet Sports App” displays team schedules, complete with game times, locations and opponents, and can be downloaded to any mobile smartphone, iPad or tablet. 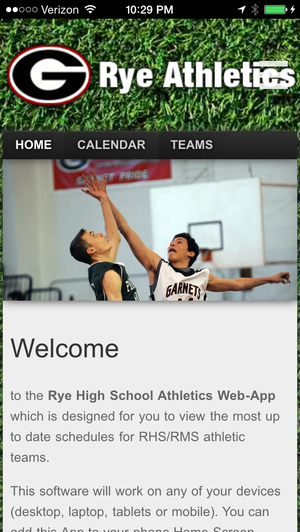 Athletic Director Rob Castagna is excited by the benefits of the new app, saying "Not only does the app provide directions to competitions via maps and GPS applications on your device, but it also allows Garnet fans to see schedule changes in real time the minute we update them."

Another valuable feature of the app is its ability to add specific Garnet competitions as a calendar event for Google Calendar, Apple's iCal and Microsoft Outlook.

Recognizing the convenience of modern technology, the reality of ever-changing schedules, and the need to streamline communication, the Athletic Office officially launched the “Garnet App” during the fall season. Mr. Castagna is now trying to encourage even wider use of the app for the winter and upcoming spring season.