At men’s fraternity at Wesleyan University is fight for its life as it is about to be shut down by administrators for not admitting women. VP of the DKE frat and Rye resident Will Croughan was featured on CBS This Morning speaking out against the college administration: 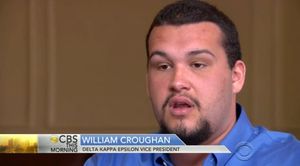 “The future of a fraternity at Wesleyan University will be in the hands of a judge Wednesday.

University officials are requiring the frat to admit women and provide housing for them, and frat members are accusing the school of discrimination.

There are just two fraternities and one sorority on campus, reports CBS News’ Adriana Diaz. Only 4 percent of the student body participates in Greek life — and that number could soon be smaller.

The university plans to shut down Delta Kappa Epsilon’s frat house because it says members did not comply with a new school directive to include women.

“I think it’s a really tragic loss for the campus, but also for my brothers,” said the fraternity’s vice president, Will Croughan….

“We are the minority on a campus like this…A lot of us are blue collar guys, you know, we’re on sports teams,” Croughan said…

“I think it’s kind of unfair that you can’t have a house where you celebrate brotherhood,” Croughan said. 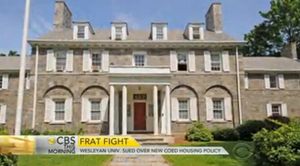 There’s also concern that women may not want to live in the frat house, Croughan said.

“Even a lot of the girls that we know … they’re like, ‘Well, yeah, we’d love to live with you guys, hang out with you guys, but the bathrooms are gross,”‘ he said.

The school declined CBS News’ request for an interview.”