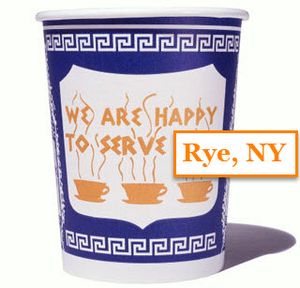 Playland, Rye Town Park, Cornell Co-Op Extension, a L.I. Tunnel and Scandals were all on the menu at Ruby's Oyster Bar and Bistro, alongside coffee and toast, at the recent edition of "Coffee and Conversation" held Saturday morning, Jan. 16th, with County Legislator Catherine Parker, Assemblyman Steve Otis and State Senator George Latimer. Nearly 20 people took time off in the morning to discuss their issues with the elected officials present, which also included new Rye City Councilwoman Emily Hurd.
County issues took the lead, with Rye resident Ralph Vellone registering concern over bike paths on Playland Parkway; Bernie Althoff seeking an update on the management contract for Playland; Linda Lefkowitz and Judi Phillips registering opposition to personnel actions with Cornell Co-op Extension, funded in part by the County government. Legislator Parker assuaged concerns that any bike path on the Parkway would, in fact, be alongside the walking path, not on the road itself. She reported that Standard Amusements has an extension until May 31 to sign the agreement with the County and projected that in 2016 the park would still be under County direction and control. She added that a meeting was expected to further discuss the volatile issues around Cornell Co-op, with two sides arguing over the propriety of dismissal of volunteer master gardeners.
Henry King raised the omnipresent issue of Albany scandals, with both Otis and Latimer clearly stating their support to punish those guilty of illegal behavior and adding laws to further tighten and scrutinize operations. Latimer has long called for the resignation of those indicted of such crimes.
Assemblyman Otis, a former Rye Mayor, laid the case for opposing the LI Tunnel project, referenced by Ann Spaeth and Meighan Corbett, and framed as a Westchester problem, not merely one impacting Rye alone.
Latimer and Otis believe the proposed study should be dropped from any consideration.
King also asked for an update on the darkened street lights on Playland Parkway Access Drive…Parker indicated that the project was out to bid, with money allocated for the repair needed.
Lori Fontanes of Rye's Sustainability Committee highlighted some important upcoming programs, and the two state legislators outlined the barebones of the Governor's 2016-17 proposed budget under review for adoption by March 31.
All three legislators invited resident follow up on these and other issues, with more coffee and conversation expected in Rye and other communities in the weeks to come.
-30-
Facebook
Twitter
Email
Previous articleSack’s Silly Season of Suppression: Guest Column by Ted Carroll
Next articleEconomist Mag Calls Cuomo Tunnel “Fanciful”