Investigative journalists at LoHud.com have been hard at work, and last year's pesticide debacle at Rye Golf Club is the centerpiece of their investgation concerning statewide misuse of toxic chemicals. 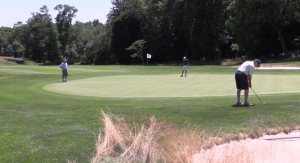 (PHOTO: Rye Golf Club, as it appears in a LoHud video.)

"A mysterious green residue started coating golfers’ shoes last spring at Rye Golf Club. Players joked about wiping the gunk off, but angry questions mounted as the lush course transformed into a field of dustbowls.

Within weeks all 18 putting greens closed, and the Westchester County enclave fell into chaos. Members demanded thousands of dollars in refunds, threatening to sue the city-owned club as turf experts combed it for clues.

The seemingly local crisis with political infighting, however, has grown into a regional environmental toxic time bomb as the Rye scandal triggered an investigation by The Journal News/lohud.com into the sale, distribution and use of pesticides."

And continues: "Authorities failed to catch the potentially illegal sale of an unregistered pesticide at Rye Golf Club, and golf courses in other states, according to the exclusive probe of the chemical industry’s underbelly." 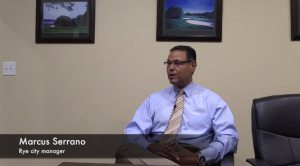 Records detailing a potentially illegal pesticide sale at Rye’s club, and misuse of chemicals, only came to light after its course superintendent, Charles Lafferty, couldn’t hide the dying grass any longer, city and state documents obtained by The Journal News/lohud.com show.

When questioned by authorities, Lafferty said he improperly used the green-colored pesticide to hide dying grass before a golf tournament, resulting in the mystery residue that initially triggered suspicion last spring.

While the contaminated pesticide batch was responsible for killing the putting greens, Lafferty admitted to a violation for misusing pesticides and was fined $500.

The Rye scandal underscored how toxic-chemical abuse goes undetected until complaints pile up, or blatant signs of hazardous conditions emerge."

You can read the full LoHud.com piece here.