In a letter to MyRye.com, area resident Ken Kraut alleges he found a razor in food served to him at Rye's Playland Market on 491 Forest Avenue.

Kraut lives in Old Greenwich, and has taught in the Port Chester schools for 40 years where he serves as the music department chair in the middle school. 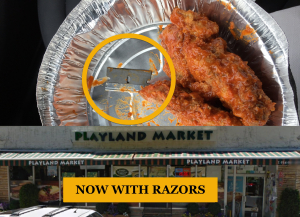 (PHOTO: The razor Kraut alleges was served to him, along with pieces of boneless spicy chicken, by Rye's Playland Market. Click to enlarge the photo.)

My name is Ken Kraut. I am a lifetime local resident, and have been a school teacher for 40 years.

At @3:30 PM, I went to Playland Market, on Forrest Avenue in Rye NY, and ordered 4 pieces of boneless spicy chicken for an afternoon snack. I ate the first two, and when I picked up the third piece I felt something underneath it. It was this intact razor blade.

I immediately returned to the store. I’ve worked in the deli business, and it wasn’t my intent to rush in and make a big scene.  I calmly walked up to the person who sold it to me, who appeared to be the manager. No-one could see or hear our conversation. He looked distressed and showed it to the person who served it to me. 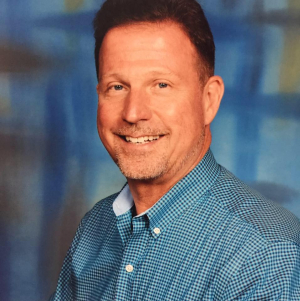 (PHOTO: Ken Kraut, the area resident who alleges he was served a razor in his food by Rye's Playland Market.)

What he did next was amazing.  There was no apology, and he actually offered me replacement food from the same batch of chicken. This large dish of chicken pieces still remained for sale.  I told him I didn’t want any, and that I felt sick.

He returned my money, and I twice asked “How does this happen?” and basically received no answer nor any further apology.

I was advised to call the police, but they said there was nothing they could do.  I called an acquaintance at the County Board of Health and was told that since this store’s business is less that 50% prepared foods, it wasn’t under the purview of the county, and that I’d need to report it to the state.  I plan to do that as soon as I have the contact information.