Former Rye Mayor and current State Assemblyman is firing back at Mayor Joe Sack's last salvo in the "Thruway Battle of 2017".

Here is a note sent from Otis to MyRye.com 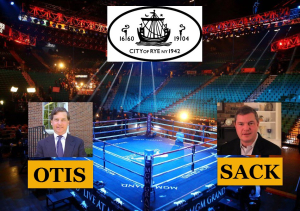 Thanks for posting my June 21 response to the Mayor’s letter. My goal has always been to get factual information out to residents regarding the Thruway property before the community loses the opportunity to make the parcel available for recreation. Unfortunately, the Mayor and Manager have refused to distribute my letter via the City listserve.

Twice during the past week the City has used the listserve in a way that it has never been used before – to wage personal attacks and spread false information regarding the Thruway parcel. The City’s listserve is the source of important public safety and other information that Rye residents need during inclement weather and other emergency situations. It is not supposed to be used for politics.

Repeatedly, the Mayor and Manager refused my request for the City to distribute my June 21 response to the Mayor’s letter on listserve. My request for the ability to communicate to residents on the list-serve file was necessitated entirely by the City’s failure to distribute, on a timely basis, my response letter via the same system.

The Mayor has now followed-up with an outrageous new scare tactic claiming that my request to be able to e-mail my response on this issue involves releasing personal information about residents. This is a false claim in every respect and another attempt to distract from the real issue, preventing resident access to accurate information.

All recipients of the violating list-serve e-mails should have access to the same information you have provided MYRYE readers: the history and facts behind an important City issue.