A Rye couple is featured in a New York Times story on picking the wrong suburb. 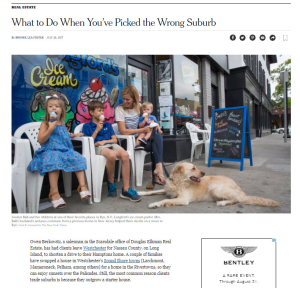 In the story, Rye is the right suburb – found after the couple first moved to the wrong suburb, Glen Ridge, New Jersey. Josslyn and Ryan Ball and their kids are one of the families that are featured in the piece. Ryan Ball pushed for the move to Rye – well done:

"When Josslyn and Ryan Ball, now both 32, decided to leave the Upper West Side for the suburbs, they wanted a community with good schools and a tight-knit feel. They ended up in 2013 in Glen Ridge, N.J., on a whim, because Mr. Ball’s friends said it was lovely. “When we moved in, everyone was so nice, and our son made friends instantly,” Mrs. Ball, a stay-at-home mother, said of Justin, now 9. She made friends, too, and she assumed they would stay forever.

Then her husband, a lawyer, started griping. He hated his unreliable commute on New Jersey Transit. It was particularly maddening when the train stopped without explanation and he would stare out at what looked to him like industrial wasteland, regretting every minute that he was not at home with his family. “He was never able to settle in,” Mrs. Ball said.

The couple left after two years when Mr. Ball got a one-year clerkship with a federal judge in Georgia. When the clerkship ended, Mrs. Ball wanted to go back to Glen Ridge, but Mr. Ball pushed for a move to Westchester, hopeful for a better commute on Metro-North. The area seemed greener and less industrial, particularly from the train windows. “He promised me that if it wasn’t better than Glen Ridge, we could move back,” she said.

They picked Rye for its express train and upscale village. They often walk from their rental house with their three children for ice cream cones, and they all feel that Rye is a better fit than Glen Ridge, even Mrs. Ball. “There are a lot of stay-at-home moms here,” she said, “and there’s so much to do nearby: the Bronx Zoo, Playland Park, the community pool. It’s easy to meet people.”"

The Government of Zimbabwe is planning to rebuild its official residence in Rye, to be used by the head of its United Nations Mission....
Read more
Open Houses