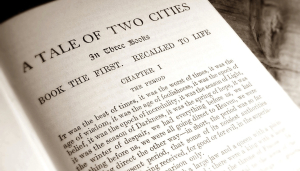 A new bombshell secret memo from Rye City Manager Marcos Serrano reveals his officially advocating for Rye City Attorney Kristen Wilson to simultaneously represent both Rye City and the Rye City employee, Charles Lafferty, who would later go on to plead guilty in court to the misuse of the same fungicide that killed all the greens at Rye Golf Course. AIG Insurance apparently never stood a chance of seeing a pile of evidence, including Mr. Lafferty confessing to registered chemical misuse, a set of altered Rye chemical spray charts, and the city’s own written scientific field test results apparently absolving the chemical manufacturer before AIG handed over their $2.55 million settlement to Rye in early 2016.

The above photo of one of history’s most famous run-on sentences hails from the epic 1859 novel by Charles Dickens entitled “A Tale of Two Cities.” What you are about to read below however is set decidedly in the present day and rests firmly in fact. And I’ll try to keep my sentences brief.

Despite epic levels of public record suppression efforts undertaken by both the City of Rye and the Town of Yorktown, dozens of never seen before Rye City records were released last year to an unknown citizen requester in a partial reply to a Freedom of Information Law Request (a FOIL in NY legal parlance). In these releases this requestor obtained multiple long sought internal Rye City documents from the official files of the Town of Yorktown (more on how and why this is was even possible later on). From the records produced to this requestor directly from Rye sprung an until now secret Rye memo documenting an official recommendation by Rye City Manager Serrano for the council to approve a conflict of interest in-law (which Rye City Counsel Kristen Wilson had apparently insisted upon) so that she could practice damage control by suppressing evidence then possessed by the city and later uncovered and published in this now 8 part MyRye series documenting the actual cause of death of all of Rye Golf Club’s putting green surfaces from the improper application of a contaminated regulated turf fungicide – AmorTech Alt-70.

MyRye series readers already know the discouraging background here. Ms. Wilson acted as legal counsel for two otherwise naturally opposing parties, a city employee who would soon confess to misusing a regulated chemical while performing his city duties and the city who sustained millions of dollars of chemical damages at its municipal golf club. This shocking overlapping legal representation conflict was prominently featured in Series Part 2- Records Erasures & Undisclosed Conflicts. In that writing, someone (then unknown) had apparently authorized Ms. Wilson to represent these two opposing interests and someone had also tampered with Rye’s public records (the Rye Golf Club chemical spray charts) providing one set to AIG Insurance, investigators and club members and another very different set to the Westchester DA, the NY DEC and the Rye City Court where Mr. Lafferty would soon plead guilty to misuse of the ALT-70. This was surely a new low, lower even than the ‘misplaced evidence’ caper Rye failed to pull off in The Caspi Case.

So now we now know for a fact that the actual authorization for this conflicted dual legal representation came directly out of a January 2016 behind closed doors vote of the Rye City Council in a so-called Executive Session where Mr. Serrano and Ms. Wilson convinced Rye elected officials to (1) approve the conflicted dual legal representation and (2) urgently wrap up the negotiations with AIG Insurance post haste before AIG could apparently find out about Mr. Lafferty’s December 2015 DEC arrest, the charges brought thereunder, and his later guilty plea.

The battle for release of these and many other Rye public records continues to this day. A Freedom of Information Law Request Appeal was to be scheduled as an official agenda item at the Rye City Council meeting this Wednesday January 24th, 2018. Given the pre-publicity about this Series Part 8 however, its status is now officially, unknown. This public appeal is necessary because Rye public records are being denied to Rye resident requestors by Rye City records officers – who have them but claim they don’t exist. And how do we know they do exist? Because the same unknown requestor received some of them via a public FOIL request directly from the Town of Yorktown and then emailed these previously unseen Rye records down to a Rye resident. How did Rye public records – like Mr. Serrano’s secret memo above – end up in Yorktown? Well, that’s The Tale of Two Cities, Version 2.0.

Those Rye public records ended up in Yorktown specifically because that is the local municipality where Rye City Manager Marcus Serrano’s wife, Sandra (Gomez) Serrano, is employed in the Comptroller’s Office and where she used her Yorktown email – sgomez@yorktown.org – and another private email address – to send, receive and store large numbers of extremely sensitive and long sought after Rye City public records otherwise kept secret from Rye residents via hundreds of emails to and from her husband, Rye’s highest ranked city employee.

Upon being alerted anonymously about these Rye record releases from Yorktown, a Rye resident filed a similar FOIL request in Yorktown for these very same Rye documents. Yorktown then rebuffed him. The Rye resident then formally appealed that decision and was again rebuffed by Yorktown. A copy of the Yorktown FOIL appeal denial is – here.

Rye Residents – Nothing to See Here, Now Pay Your Taxes

This same Rye resident also appealed directly to Mr. Serrano who is Rye’s Chief Records Officer. Mr. Serrano in turn directed that only those documents previously released directly by Rye to the unknown requestor to be released to the Rye resident. Copies of the other Rye documents, provided by Yorktown to the unknown recipient, were NOT released by Rye to the Rye resident. Mr. Serrano then swore and signed a notarized legal affidavit that no additional records – including certain Rye records that had already been released by Yorktown but not by Rye – exist. The problem for Mr. Serrano (and Rye City officials) is they do exist and we have obtained copies. But see Mr. Serrano’s sworn Rye City Affidavit, for what it’s worth, – here.

Concealing or suppressing or tampering with or destroying public records is a felony in NY State as it is elsewhere. Swearing to something falsely is also a crime. Federal laws cover this same ground. The EPA, to name one federal agency, restricts misuse of registered pesticides (see 16 documented apparent violations of Federal Pesticides Law at Rye Golf Club here in Series Part 5). The FBI, to name another federal agency, would likely find a possible/probable multi-million dollar insurance fraud against an American insurance company by a U.S. municipality as a matter of natural law enforcement interest.

Rye municipal evidence suppression tactics of public documents are nothing new.  Rye evidence suppression controversy’s include ‘Schubert’s Pond,’ the Rye Golf Club’s ‘Scott Yandrasevich Multi-Million Dollar Swindle,’ the report of the city hired forensic accountants documenting who authorized that same fraud (‘The Breen Report’), the above mentioned Caspi Case, and now Rye Golf’s ‘Poisoned Greens’ – all these feature suppressed or tampered or destroyed exculpatory Rye City public documents (which are later provided by 3rd parties) that would direct attention to municipal malfeasance and/or fraud. That’s why certain Rye document requests by certain individuals – including those from this lifelong resident author – are withheld until city officials can be slapped in the face with copies of them obtained from alternative sources. Then suddenly those same Rye public records – which one must first always produce from elsewhere – are quietly released by the Rye city clerk.

A Season of Light?

Ok, Mr. Mayor. We’ve done the legwork here and we’ve endured a pile of lies. We now hand this latest records suppression baton over to you and your “Moving Rye Forward” team. Then we’ll circle back later this year to report on progress or lack thereof.

How does one rank the chances of real reforms here?  My current view is it’s either the best of times or the worst of times, the season of light or the season of darkness.  Please let me know what you think in the comments section.