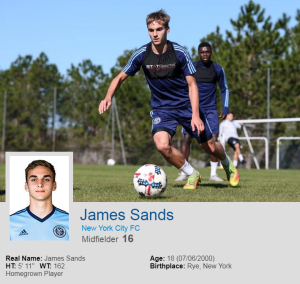 Rye native James Sands, who was recruited to the NYCFB (New York City Football Club), the Major League Soccer franchise that plays in Yankee stadium, back in 2017 at age 16, is still trying to breakout and gain playing time.

He was written up in a recent piece in Pro Soccer USA:

"Sands starts in Homegrown game, but will he ever get minutes for New York City FC?

NEW YORK — James Sands recorded an assist when his flick-on header off a set piece fell gently to Liam Fraser, whose goal from close range led to a 1-1 draw with Tigres UANL under-20s in the 5th annual MLS Homegrown game.

In the 750 games combined and the 48,000 minutes logged by Homegrown players in the MLS this year, Sands has yet to make an appearance for NYCFC.

“It’s not important for me [being] a young player or not, it’s the quality of the player,” NYCFC head coach Dome Torrent told Pro Soccer USA before the team’s 3-1 defeat at Seattle on Sunday. “It doesn’t matter, 16 years old or 28 years old. Jimmy has this quality to play with us.”…

“With Dome, he believes a lot in the youth,” Sands told Pro Soccer USA. “So I think that will help me out in the future. I need more time with him and he needs more time with me so I can show him what I can do.”

With the emergence of Awuah and the arrival of Torrent’s hand-picked midfield transfer from Girona, Eloi Amagat, the prospects for playing time may diminish for Sands – although the head coach has suggested that the Rye, New York native could also contribute at fullback.

“It’s nice to know,” said Sands who turned 18 years old July 7. “I haven’t played fullback that much. He switches up tactics with fullbacks inside sometimes so that might suit me more. Maybe he sees me there – he knows what he’s doing.”

Despite a mere 23 minutes as a professional when he replaced Andrea Pirlo in a match against Colorado last September, Sands remains steadfast and patient.