That ride will be $10.6 million dollars, thank you.

That's what county pols approved earlier this week to restore two of the historic Playland rides. Both rides are on the National Register. The Carousel was damaged by fire back in 2017. 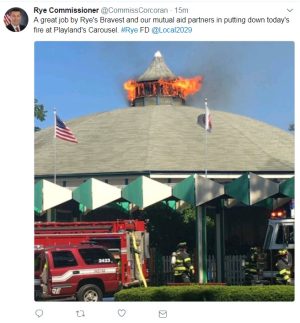 Will that be cash, credit or bond?

The $10.6 million will be bonded. According to the county (see below) they expect $465K in New York State grand money as an offset, and expect insurance to cover "a significant part" of the Carousel project. The country release did not specify the amount, but LoHud.com reports the amount at $1.3 million:

"The county plans to recoup some of the cost for the carousel work from insurance. Last year, county officials said $1.3 million to restore the ride’s 66 horses and chariots would be paid out of insurance. That work was contracted to WRF Designs in Connecticut."

Here is the county release:

White Plains, NY — On Monday, the Board of Legislators unanimously approved financing for the restoration of two of the park’s most famous rides, the Derby Racer and the Grand Carousel.

The approved work includes a complete overhaul of the park’s 104-year-old Carousel, the roof of which was damaged in a fire in 2017. Also approved was the reconstruction of the building that houses the Derby Racer, which was built in 1927. Both rides are on the National Register of Historic Places.

The Carousel project includes rebuilding the structure, the addition of fire breaks in the roof to inhibit the spread of fire in the future, the replacement of the sprinkler system and the installation of new electrical systems.

The Carousel is expected to re-open next season.

Majority Leader Catherine Parker (D – Harrison, Larchmont, Mamaroneck, New Rochelle, Rye), in whose district Playland is located, said, “It’s exciting to see the County fully committed to bringing these rides back to their glory. This has been a great summer at Playland, with attendance up significantly over recent years, and the first new ride installed at the park in more than a decade. Approval of these renovations is another step in Playland’s renewal.”