All in the (Rye) Family: Brian Moran Faces Brother Colin in MLB Debut 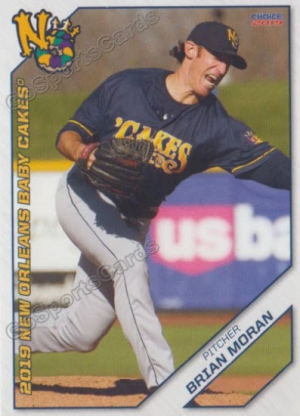 (PHOTO: Brian Moran's first MLB strikeout was against his brother Colin. Both hail from Rye.)

Rye brothers Brian and Colin Moran faced each other in the MLB debut of Brian, a pitcher for the Miami Marlins. Brian struckout his brother Colin Moran of the Pittsburgh Pirates. The two are nephews of another Rye MLB player, B.J. Surhoff.

"Iona Prep's Moran brothers face off against each other, make MLB history

It has been a long journey for Brian Moran.

The 30-year-old, who starred at Iona Prep over a decade ago, recently received his first major league call-up from the Miami Marlins after toiling in the minors for years, including stints in independent leagues.

The left-handed pitcher made his debut Thursday night, coming into a game against the Pittsburgh Pirates in the fourth inning.

Not only that, he got to face his younger brother, Colin. And in the process, he made history.

Brian struck out Colin in the encounter, freezing him with a full-count slider. It marked the first time in MLB history since 1900 that a player making his debut faced off against his brother in an at-bat…

The Morans are Rye natives. Brian capped his senior year at Iona Prep in 2006 by winning The Journal News Westchester/Putnam Player of the Year. Colin graduated Iona Prep in 2010, was a star at North Carolina before being picked No. 6 overall in the 2013 draft by the Marlins.

They are also the nephews of B.J. Surhoff, a former Rye High School star who played 19 seasons in the major leagues and was an All-Star. Their grandfather, Dick Surhoff, played for the New York Knicks in the 1950s."

Read the rest at LoHud.com.