It's not news. More of an acknowledgement.

There was an election yesterday. No bigger races to speak of, and in the city of Rye there were only three candidates for the three open seats on Rye City Council.

Richard Mecca renews his time on council, and Carolina Johnson and Pamela Tarlow are new to the governing body. Each will serve a four year term. 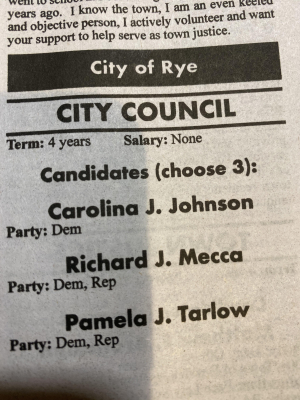 (PHOTO: In a sign of the non-contested election, none of the three cadidates for Rye City Council submitted biographical or other information to the League of Women Voters election guidebook.)

Here are the voting tallies, as of Wednesday morning: