Assemblyman (and former Rye Mayor and Rye Country Day alum) Steve Otis has been a big proponent of this shared use plan and announced this milestone via a new release on Tuesday. Some of the history around the property is recounted in the news release. The move also has some detractors including former Mayor Joe Sack. 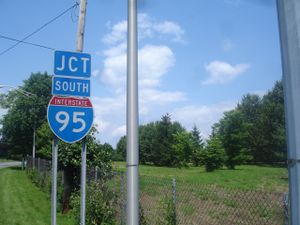 "State Legislation to Allow Sale of Rye Thruway Property for Shared School and Public Use Signed Into Law.

Assemblyman Steve Otis (D-Rye) announced today that Governor Cuomo has signed legislation to allow sale of the Thruway Authority property on the Boston Post Road in Rye for shared recreation use by Rye public sports groups and Rye Country Day School. The school estimates raising $30 million to acquire the property and build recreational facilities to be shared with public groups as guaranteed by the legislation.

Assemblyman Otis, in announcing approval of the legislation stated, “This culminates four years of support from Governor Cuomo and the Thruway Authority to make this state land available for recreation for the entire Rye community. This new law is a big win for Rye recreation groups including Rye Youth Soccer, Rye Youth Lacrosse, Rye Rangers Hockey Club and Rye Recreation, current users of the school’s existing facilities who will benefit from the new field, track and expanded recreation space.”

The new legislation allows Rye Country Day School to purchase the parcel and develop recreation facilities with guaranteed use by public recreation programs, protected by a permanent covenant as part of the sale. The City of Rye chose to pass on the opportunity to acquire the property in 2016 and requested that the state sell the parcel to the school.

The Thruway Authority and the administration agreed not to auction the property but rather work with the community and Assemblyman Otis on the sale of the parcel for recreational purposes.

The City of Rye and the school have sought recreational use of the property since the late 1980’s. The parcel is included in the City of Rye Recreation Master Plan. As a property sitting on one of the gateways to Rye on the Boston Post Road, the city and the school have long opposed unacceptable uses on the site. Mayors Mary Ann Ilse, Warren Ross, and Ted Dunn all weighed in with the Thruway Authority regarding future uses on the site and worked to protect Rye’s interests.

When he served as mayor, Assemblyman Otis negotiated with the Thruway Authority for the ability of the city to lease the parcel for recreational purposes. The school would have been a participant in the development of that field project. In the end, however, the successive city administrations chose not to exercise that option.

Legislation was passed in 2017 to allow sale of the property to the school and tasked the city and the school to agree to a use plan delineating a schedule of school and public use times. While a use schedule was arrived at in 2018, agreement on a written document proved elusive, as the City Council sought additional provisions seeking joint control over the parcel that were beyond the scope of the 2017 authorizing legislation.

With no agreement, the community would forfeit the opportunity to acquire the parcel and therefore lose it to the open market. The school was prepared to invest in other locations and forego the Thruway parcel this summer.

Understanding the community recreation acquisition of the parcel was in peril, Assemblyman Otis passed new backup legislation in June to guarantee public use via a covenant rather than the use plan in order to ensure that the community did not lose the opportunity to secure the property. The passage of the new legislation provided a new opportunity for the city and the school to reach agreement. Negotiations continued through August, September and October.
By the end of October 2019, the School made concessions, but agreement was rejected by the city.

With the approval of the new measure, the school can now proceed with the Thruway Authority through the contracting and sale process. The school will be paying full value for the property, which will be calculated by an updated appraisal conducted by the Thruway Authority. The new legislation guarantees shared use with the public recreation programs on a permanent basis.