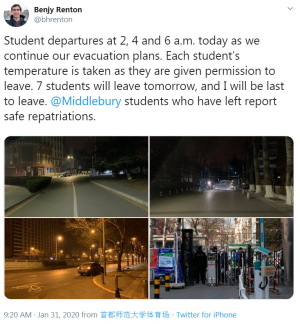 "Currently, seven students remain in our dorm building and will depart tomorrow, February 1. Today we saw the departure of four students and a resident director during the morning and afternoon. Each student has their temperature taken upon checkout and will sign a consent form. The security at the exit gate has been reasonably accommodating for students leaving to the airport. Few lines are at Beijing’s airports and not much has changed in recent days for departure procedures, however students are advised to arrive at the airport at least three hours in advance. While one student’s flight to Los Angeles has been cancelled, we have rebooked him and now all students’ flights are currently on schedule. It’s a quiet night in our dorm building as the final students prepare for repatriation. We had one last takeout dinner. We anticipate no problems with departures tomorrow, currently scheduled to depart campus at 8:20, 10:00 and 12:30, but will continuously monitor the situation.

This will be the last major update from China, though we will possibly continue more updates once on the ground in the U.S. All students are scheduled to arrive before 12:30 a.m. Eastern Standard Time on Sunday, February 2."

See Renton collecting a takeout dinner his last might in China:

A piece in the Boston Globe had additional details:

Watching movies and eating takeout every night, Benjy Renton and seven other students are seemingly living a normal college life, he said. Except that they’re in Beijing, holed up in a dorm as the coronavirus blankets the city with fear.

Renton, a junior at Middlebury College, and 10 other students arrived in China on Dec. 26 as part of the Middlebury January term study abroad program, he said in a telephone interview Thursday night. But as the virus beset the country, Middlebury called the students back from the various locations where they were staying in China to gather in Beijing, where some have left and the others have been waiting to get a flight home.

“It’s definitely a pretty tense atmosphere,” said Renton, who is from Rye, N.Y. “Many public areas refuse entrance to anyone not wearing masks. There are a lot of unknowns as to how the virus can spread, and people are taking any precautions they can to limit their contact with people."…

The students in the Middlebury program have been asked to stay on campus at Capital Normal University in Beijing. If they want to leave, they must notify their director and sign out with a guard at the gate, leaving their student ID number, their phone number, and explaining why they’re leaving and when they’ll return, Renton said…

On Wednesday, Middlebury announced that its spring semester programs in China would be suspended. Thirty-seven students had signed up to attend, including Renton and 10 others who were in the country for a separate January session. Some who went to China for the January session are from other schools, he said."