Otis is a former Rye mayor and has served in the Assembly since 2013. He ran unopposed in the 2018 election with 99.5% of the vote in the general election.

Cameron spoke with MyRye.com in 2013 when she ran for Rye City Council. She supported George Latimer in his run for county boss and more recently she was critical of Otis on the Thruway property (she was also critical of former Mayor Joe Sack on the same issue).

What do you think of the Cameron candidacy? Leave a comment below.

Rye resident Meg Cameron announced today that she is running for NYS Assembly in the 91st District. This district covers the towns of Rye and Mamaroneck, including the City of the Rye, the Villages of Larchmont, Rye Brook, and Port Chester, and the eastern part of New Rochelle. 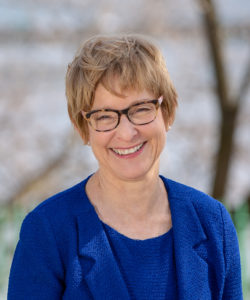 A 35-year resident of the area, Meg said she entered the race because “The 91st District needs new, strong, principled representation.”

As Chair of the Rye City Democratic Committee for the last six years, Meg led the initiative to flip local government from 100% Republican-endorsed to 100% Democrat-endorsed, while strengthening the committee and doubling its membership.

As Assemblywoman for the 91st district, Meg will focus on helping the district recover from the COVID-19 crisis. Also, she will work to get fair public-school funding, pass gun safety laws, fund maternal health care, promote women’s and LGBTQ rights, and implement solutions to the climate crisis.

Meg and her husband have two children who attended Rye City public schools. Meg has volunteered in the community with children, seniors, and immigrants. As a nine-year member of the Executive Board of Planned Parenthood Hudson Peconic, she has worked to ensure the availability of health care, including birth control, life-saving cancer screening, and prenatal care, no matter what. More recently, with her husband and son, Meg has been volunteering to source protective medical equipment, including intubation boxes and face shields, for use in hospitals treating COVID-19 patients. She says she intends to bring this active engagement to Albany.

“Now, more than ever, we need bold leaders who deeply engaged in our community, said Meg.

She continued, “A representative must know and care about the people she represents, and serve as their passionate advocate. I will make sure all the district’s people have a voice in Albany.

Originally from Brooklyn, Meg graduated from SUNY Purchase with a BFA/BA in Visual Arts and Biology and attended Albert Einstein College of Medicine, Sue Golding Graduate Division, earning a Master of Science in Immunology.”