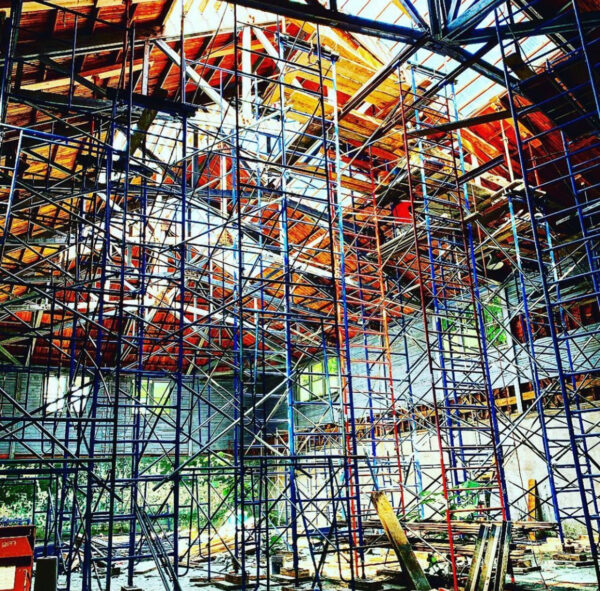 It is going to take more than a tennis court brush to clean up this 103 year old court. The Jay Heritage Center (JHC) announced its first volley — phase one completion of a major restoration project to stabilize its 1917 Palmer Indoor Tennis House.

The Palmer Tennis House — a wood clapboard structure 60 feet wide by 115 feet long, with massive, three-foot-thick and ten-foot-high stone foundation walls — is one of the oldest enclosed courts in the United States. A wood and steel truss system supports the roof and was at one time accented by six copper skylights. It predates the 1918 Racquet and Tennis Club in New York and J.P. Morgan‘s 1929 indoor tennis building on Jekyll Island, which both share similar design elements.

The successful completion of this work is due to the JHC’s public-private partnership with the New York State Office of Parks, Recreation, and Historic Preservation. Together the two entities invested over $500,000 in this endeavor. 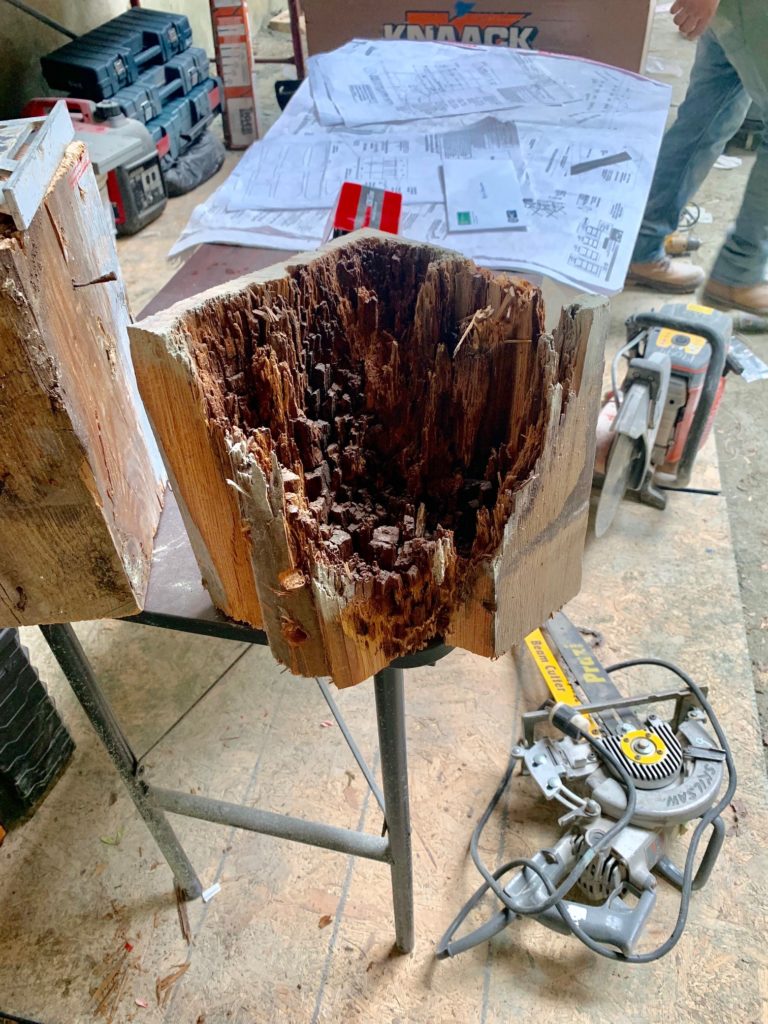 (PHOTO: This rotten beam was replaced.)

The project, which included structural repairs to shore up the building’s trusses and sills, was funded in part by the Hurricane Sandy Disaster Relief Assistance Grant Program from the National Park Service. The grant program supports historically significant properties that require restoration and repair in the wake of severe damage from Superstorm Sandy. Steve Tilly Architects, a team noted for excellence in preservation, was retained to oversee the project.

The stabilization effort, which was completed by Apple Restoration and Waterproofing of Brooklyn, New York, is the first phase of a major renovation project that aims to make historic clay court playable again. Apple’s other projects have included prestigious historical restoration commissions including the Edgar Allan Poe Cottage in the Bronx.

During the restoration process, JHC also brought electricity to the building for the first time in three decades. Future phases of the project will include resurfacing the court and possibly the addition of a viewing gallery. Ultimately, the goal is for the court to play host to tennis clinics and tournaments for students, including children from nearby underserved communities.

History of the Palmer Tennis House

Princeton University benefactor Edgar Palmer purchased the Jay Estate in Rye in 1911 and commissioned a survey of the property in 1917 by Brinley & Holbrook, which identified an existing tennis house on the southwest corner of the property near Barlow Lane. Covered or “enclosed” tennis courts for individuals or even for private or athletic clubs were virtually unheard of at this time because of the expense involved in erecting them. Palmer and his father were members of the Jekyll Island Club as of 1913, when the first indoor court was erected, and would have certainly been familiar with the building and possibly its architect Walter D. Blair. Palmer also had social and business dealings with the Gould and Morgan families as a member of American Yacht Club in Rye (founded by Jay Gould) and New York Yacht Club (of which J.P. Morgan was a prominent member).

The building and surrounding grounds were passed down to Edgar Palmer’s daughter, Zilph, and her husband, Walter Devereux, who opened the facility regularly to national-caliber high school tennis players for the Eastern Interscholastic Doubles Championships in the 1950s and 60s. JHC has thus far traced the career of at least one of the students who won a tournament there, Sean Sloane. Sloane went on to pursue a much-lauded career in coaching at Williams College, followed by work with the USTA; a coveted sportsmanship award is named in his honor.

The tennis house continued in use until the 1990s before falling into disrepair. JHC is working with the historian at the International Tennis Hall of Fame to discover more about the history of the building and put it in the context of the evolution of the sport.

The JHC is looking for photos local residents might have of people using the Palmer Tennis House before it fell into disrepair. If you have any photos of interest you are able to share, please get in touch.

Unless you have lived in Rye since the 1990s, you might not know the Jay Heritage Center (JHC) on Boston Post Road almost became...
Read more