Home Government City of Rye As Wainwright Battles for Its Survival, a Q&A with its Board President
GovernmentCity of RyeCommunity GroupsRye City CouncilWainwright House Rye

As Wainwright Battles for Its Survival, a Q&A with its Board President 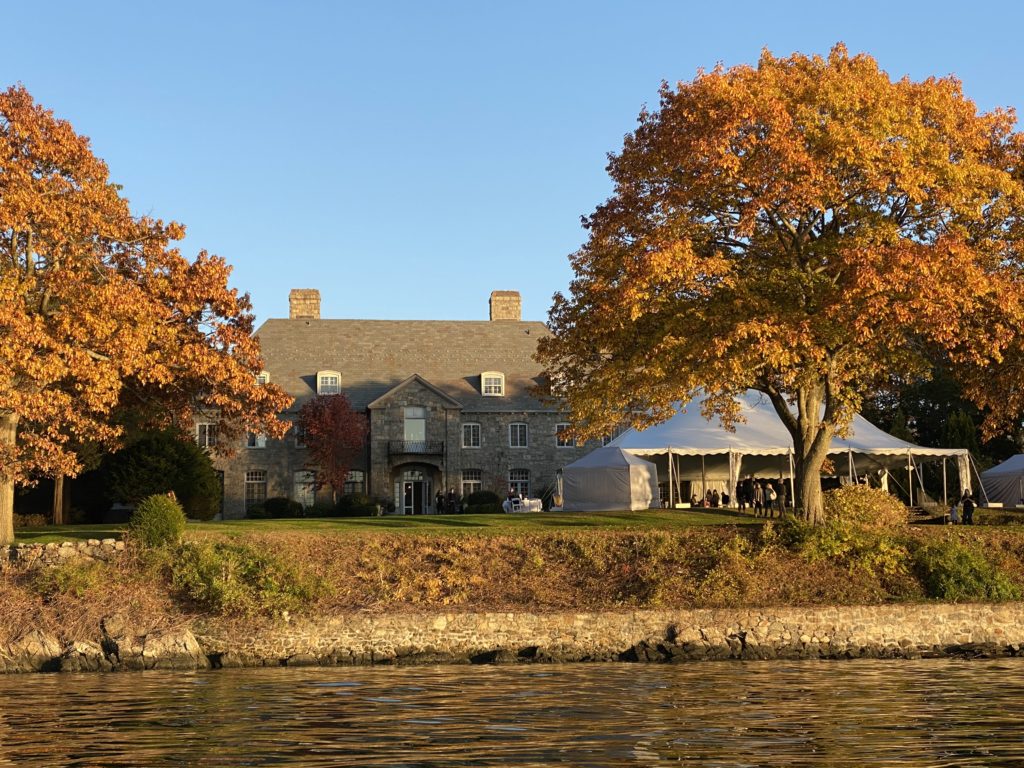 Two Rye organizations – the private, eight year old RowAmerica Rye and the non-profit 70 year old Wainwright House – are in varying degrees of jeopardy. Finding what looked like a way to work together and provide for the continuation of both entities, they took the idea to the Rye City Council. After encountering resistance from Milton Point neighbors, they also received a lukewarm “no action” vote from council, effectively blocking a path to further discussion with the Planning Board (see our story from Friday: Rowing Against Misinformation, RowAmerica Rye Founder Tells His Story on Wainwright Plan).

MyRye.com recently spoke with Wainwright House Board of Trustee President & Treasurer Bob Manheimer. A longtime Rye resident, Manheimer ran the international banking subsidiary of a major US bank prior to buying a business services company which he ran for sixteen years before selling it in 2016 and retiring. He is active in Rye Rotary Club and is currently the treasurer of the Club and its foundation. He has been president of the Board of Trustees and treasurer of Wainwright House since June 2019.

MyRye.com: What is the mission of Wainwright House?

Manheimer: Wainwright’s mission is the development of human potential. The property hosts conferences, retreats, classes, weddings, programs, workshops, cultural events, and other such activities with an emphasis on spiritual and personal development.

What is the history of the Wainwright family in Rye, and when was the house gifted for its current purpose?

The main Wainwright House estate was built by Col. J. Mayhew Wainwright between 1929 and 1931 based on a 17th c. French Chateau where he had been stationed during World War I. On the eve of battle, Col. Wainwright promised himself that if he survived, he would build a house resembling the chateau on his family’s property in Rye, New York. Col. Wainwright and his wife, Laura Wallace Buchanan, built this estate and lived there with their daughter Fonrose Wainwright Condit until they passed in 1945 and 1946, respectively. The Wainwrights are scions of the Peter Stuyvesant family who owned most of Milton Point.

Fonrose Wainwright and her husband Philip King Condit lived in a smaller home to the south of the main estate, now known as the Fonrose House. They had no children, and she was widowed shortly after her parents died.

How is Wainwright used today by members and guests?

Manheimer: Wainwright hosts many community groups and events, such as meditation classes, parenting courses, book and artist discussion groups, writing and poetry groups, teen groups and related programming, family events, as well as self-improvement and holistic studies. Many of Wainwright’s offerings focus on physical self-improvement such as yoga, tai chi, karate, and other disciplines. 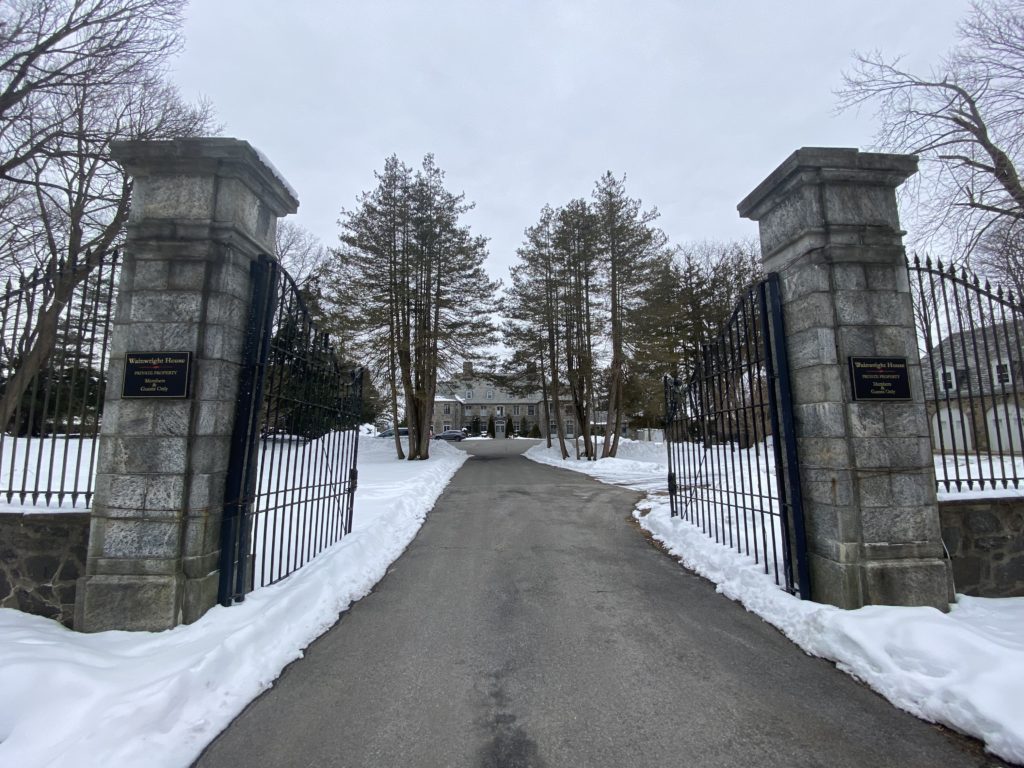 (PHOTO: The main entrance to Wainwright at 260 Stuyvesant Avenue.)

Membership gives people use of the grounds and limited access to Milton Harbor for kayaking and paddle boarding by appointment. With membership, there are discounts for our programs, and discounts on the rental of our venue for personal events.

The current board of trustees is largely new. You were recruited to join the board in 2019 after a stint as president of Rye Rotary. What has been the recent focus of the board?

Manheimer: The focus of the board is to ensure the economic viability of Wainwright House so that it can continue to offer its programs and venue to the community. Covid-19 has negatively impacted us, as it has so many organizations who depend on social gathering. We have developed remote programing and socially distanced offerings to keep us operational during this difficult time.

Wainwright has struggled with finances over the years. Several years ago, it sold a strip of its property to an adjacent neighbor to raise needed funds. The pandemic has wiped out its event income from weddings and its rental income from the two organizations – the Rye YMCA and the Brava Dance Studio – that typically hold classes at your five acre property. What revenue options are available to Wainwright today?

Manheimer: We are treading water financially and have been able to just get by month-to-month during the pandemic. All large gatherings have been curtailed. To some degree they have been replaced by other events with up to 50 people. We have worked with local arts groups who are delighted to use our venue for their performances. The proceeds from ticket sales are shared with Wainwright.

Also, since our premises are not yet fully open, and we are not completely operational as we were pre Covid-19, we reduced the hours of our staff to a minimum. That has temporarily reduced our cash flow requirements but has placed our loyal staff in a bad position.

Is Wainwright at risk of financial insolvency?

Manheimer: Wainwright House owns a valuable piece of property which we do not want to liquidate. The issue is we need a dependable, consistent source of revenue to maintain the property and its historic structure so that our members and the public can continue to have access to it and our programs as they have for 70 years. 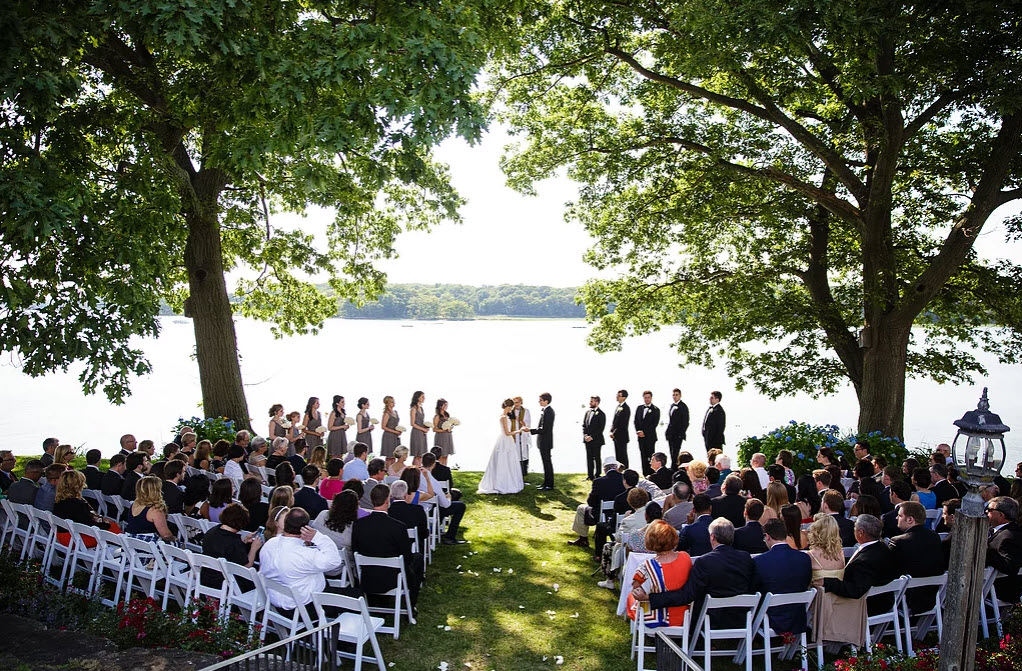 Rental of the venue for weddings and the longer-term rental of the Carriage and Fonrose Houses to organizations, whose activities are consistent with our mission, are that reliable source of revenue. Historic estates, such as ours, commonly use the rental of their venue to support their upkeep. Wainwright House may not be as grand as The Breakers in Newport, Rhode Island, but it is Rye’s version.

Your current proposal to allow Row America Rye to run its rowing programs from the property has encountered resistance from your neighbors on Milton Point.
What’s the value of this proposal to the community, and how do you understand your neighbor’s concerns and your ability to mitigate them?

Manheimer: First and foremost an association between the rowing club and Wainwright is a creative and mutually beneficial one that will assure that both organizations remain in Rye.

We are aware that the neighbors had previous concerns about noise from weddings and future concerns about traffic from Row America. The partnership through Milton Harbor Foundation (MHF), resolves these concerns while providing financial security to Wainwright House. 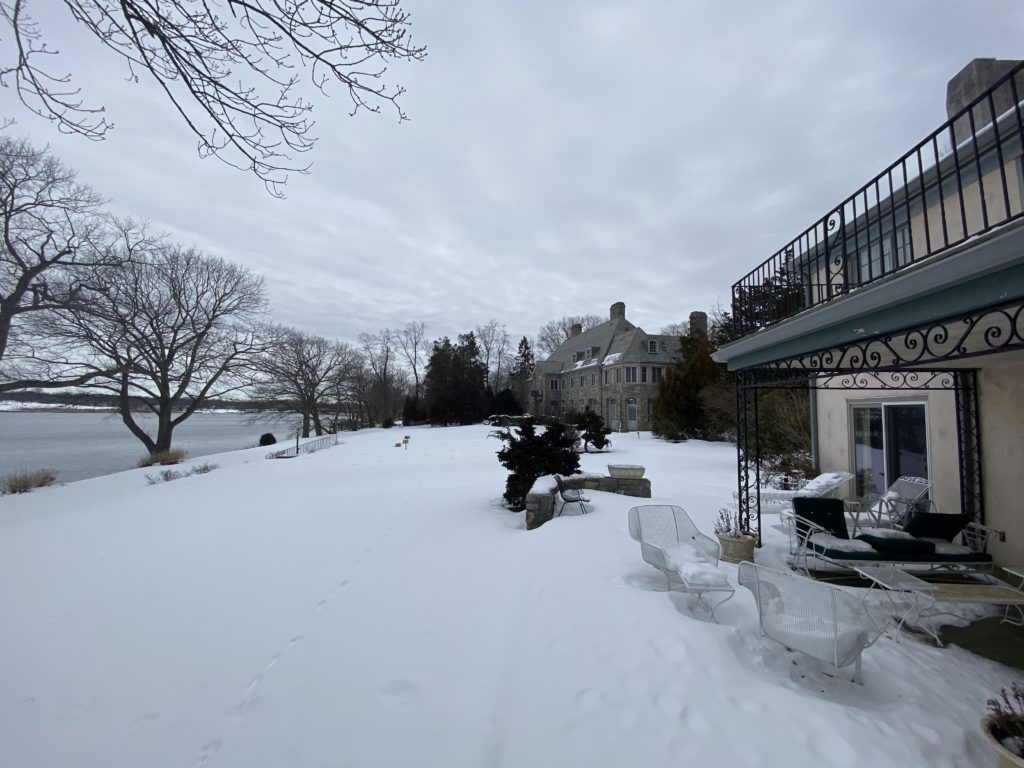 (PHOTO: Fonrose House, in foreground, is dilapidated. The main Wainwright House in across the lawn in the distance.)

First, MHF would gift to Wainwright House a new multi-use sound-proof structure to replace the dilapidated Fonrose House. We would be the sole owner of this building and enjoy full discretion to use or license it. Wainwright House would license this new space for certain time blocks to MHF, who would then hire a provider of recreational rowing instruction (initially the RowAmerica Rye organization). In return, Wainwright House would receive an annual license fee that would help defray its operating budget. 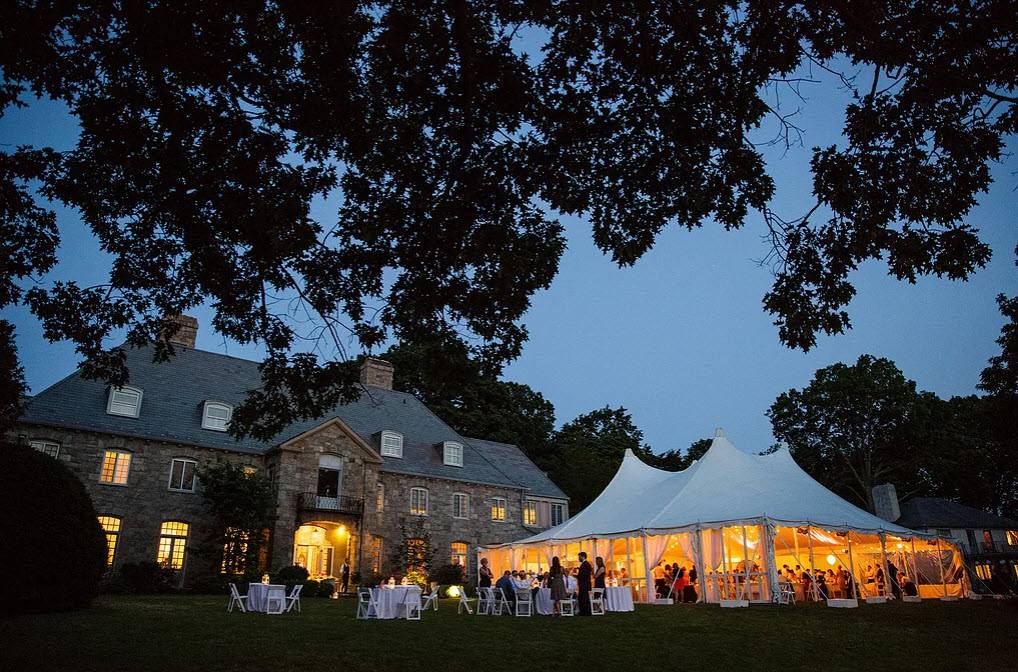 (PHOTO: Neighbors complain about the noise from the ten weddings with amplified music the City of Rye allows Wainwright to hold outdoors each year.)

As I already pointed out, the rental of our venue is Wainwright’s most dependable source of funding. Weddings currently take place in the tent that we erect in the warmer months behind the mansion. We are keenly aware of the neighbor’s predominant concern – noise from wedding bands performing in the tent. We adhere to the limitations set forth in the City’s resolution governing the use of the tent and have been searching for a remedy to eliminate the noise. Having a new soundproof facility on the site of the Fonrose House would end the need for the tent. That is a big plus for the whole area.

With regard to traffic, our mandate as Board trustees is to encourage visitation to our facility through a vast array of different offerings. We invite visitors to our property every day for classes, outdoor events, sports activities, religious services, mindfulness, and on and on. Traffic has been coming to Wainwright and the other facilities on Milton Point for a very long time. Currently all the rowing club related traffic is on Milton Road without adequate parking areas to drop off and pick-up rowers. If rowers accessed the Harbor from the Wainwright property, there are adequate parking areas where parents can drop off and pick-up rowers, with a separate entrance and exit, and right of way for street traffic. Through this proposal, we are confident that there will be an overall improvement to the traffic conditions in Rye. All these concerns of neighbors should be vetted by the City’s Planning Commission.

RowAmerica Rye is the top junior rowing club in the nation. In 2019, the junior boys and girls won the prestigious Head of the Charles Regatta in Boston, beating over 80 other clubs from across the nation. No other club has ever won both the boys’ and girls’ races. RAR’s racing accomplishments, for a club that has only existed for seven years, is nothing short of incredible.

Howard Winklevoss, the benefactor who has financially subsidized the rowing club Rye operations since its establishment (RowAmerica Rye has never been a profit making, commercial operation), has clearly told me that the club’s current location at the Rye City Boat Basin is definitely no longer viable for a variety of reasons. The only alternative to retain the club is at Wainwright. Otherwise, Mr. Winklevoss indicated to me the club will be moved out of Rye. That will be a loss for the city.

How is running a rowing program from your property any different from the various boating and other programs run from the three private clubs–American Yacht Club, Coveleigh Club and Shenorock Shore Club–on Stuyvesant Avenue?

Manheimer: The rowers have been training for seven years on Milton Harbor. Moving to Wainwright will not change what is already taking place on the harbor. The other clubs on Milton Point do not have teams of rowers and coaches using racing shells.

Rowing is a green sport and we specified in the proposal our intention to not add another gas-powered activity to the waters of the Harbor. Furthermore, Wainwright House is not a private membership club. We welcome anyone as a member and ask for a modest donation.

Finally, unlike programs at these private clubs for only youth members, the program at Wainwright would be available to the public through the rowing provider. In other words, we view this as not changing what is occurring on the harbor waterway, but rather improving access to the shared resource of Milton Harbor.

What’s next for Wainwright House?

Manheimer: We were hoping that our proposal to the City Council would be referred to the Planning Commission to be vetted for its recommendation back to the Council. We actually were interested in having additional fingerprints on the proposal to best address the concerns and needs of this community. The process has been tabled and we remain hopeful that it can be reconsidered by this Council.

In the meantime, Wainwright will now submit to the Planning Commission a request to renew the City Resolution governing the usage of our tent. The current five-year Resolution expires at the end of the wedding season in October of this year and we are already receiving wedding inquiries for 2022.

We know what you have been waiting for ... Will you be the envy of all your Rye pals, or will you need to endure...
Read more
Community Groups