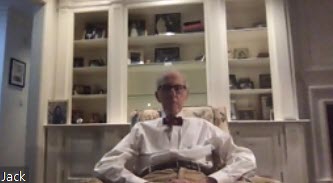 The Mayor John Carey Merit Award, presented by the current Mayor to a Rye resident who has made meaningful contributions to public life in the City of Rye, was presented Wednesday night at Rye City Council to George “Jack” Zahringer, a resident of Rye for the last 62 years.

Zahringer was recognized for his service on the Landmarks Advisory Committee. He has contributed to our law permitting tax relief for restoration of historic properties, was elemental in a successful effort to have Baird Square, the police booth triangle by Citibank, landmarked, and is currently working on the pending proposal for new Rye welcome signs.

Appearing with the council on Zoom, Zahringer said “It is a pleasure to get a pin” and then like any good advocate spoke about work completed recently including the protection in “historic Rye” for the Meeting House, Purdy House and Bird Property and plans to protect at least three houses built after 1850 in what he called “commuter town” Rye (post railroad).

Current Mayor Josh Cohn presented the award, and his comments are include below.

“The Mayor John Carey Merit Award is presented by the current Mayor to a Rye resident who has made meaningful contributions to public life in the City of Rye, both in the past year and over an extended period, in the example of former Rye Mayor John Carey.

This is a difficult award to give, but that difficulty is reflective of the wonderful talents so many Rye residents make available to the City. Our boards, commissions and committees are blessed with the intelligent and diligent efforts of many — working hard not for themselves, but for the public good. It is hard to choose among them. I hope, in giving an award to one, it is understood that I intend the award for all.

Tonight, though, I am particularly honored to present this award to the indefatigable Jack Zahringer. Jack has lived in Rye for 62 years. For the past 26 of those years, and to this day, Jack has made time in his life for our Landmarks Advisory Committee. His time has been well spent. He was a major creator of our law permitting tax relief for restoration of historic properties. He was a prime mover in the successful effort to have Baird Square, the police booth triangle by Citibank, landmarked. And he has been a force to be reckoned with in the pending proposal for new and beautiful Rye welcome signs that is pending before the City Council. Jack is a storehouse of Rye knowledge and an appreciator and protector of what Rye was and now is.

Putting aside Jack’s particular projects and interests, though, most of all, we thank Jack tonight for the example he has set of one tirelessly passionate for the betterment of our City.

Jack, please accept this award from your grateful Rye. ( We are playing by pandemic rules, sadly, so I will bring it to your home tomorrow.)

We welcome your words, Jack.”

We know what you have been waiting for ... Will you be the envy of all your Rye pals, or will you need to endure...
Read more
People

Eating Rye is an occasional feature to meet the chefs and other professionals in the restaurant kitchens across Rye. When you dine-in, pick-up or...
Read more