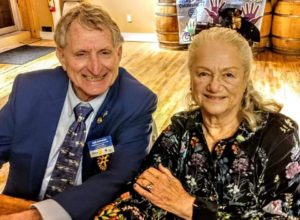 Janis L. “Jan” Solomon, 80, of East Hampton, beloved wife of Jack Solomon, passed away peacefully on Sunday December 26th at Middlesex Hospital (Middletown, CT). Born May 28, 1941 in Queens, NY, she was the daughter of the late Jack and Sylvia (Herman) Dollinger. Jan was a retired chemistry teacher from Rye Neck High School in Rye Neck, NY.

Jan was a graduate of Kent State University and an avid volunteer. Over the years she donated her time to various places, for example, working as a lifeguard for the Handicapped Association of Rye. She also volunteered for the American Red Cross teaching CPR, First Aid, First Responder, and Lifeguard Training. She was a Key Club advisor to her high school students. And in her later years, she donated time to Friends of Lake Pocotopaug and the Rotary Club.

Jan also enjoyed an active life. In the mid 1990s, she competed in the Macabee games in Israel and received three gold medals. She enjoyed traveling with her family visiting places as far away as Antarctica, Hawaii, Alaska, and Ecuador.

Besides her husband Jack, she is survived by her daughters and their spouses Sheri Leigh and George Keenan of CA, Alyssa Solomon and John Czako of Newington, Susan Adams and Justin Adams of Colchester, her two brothers Michael Dollinger of WA, Robert Dollinger and Susan of NJ, her six grandchildren Jason Eiker-Wiles, John Czako Jr., Nate Czako, Kess Czako, Oakley Adams and Benjamin Adams, and her great grandson Bastian.

In lieu of flowers memorial donations in Janis’ memory may be made to a scholarship created to encourage girls to enter the Sciences.