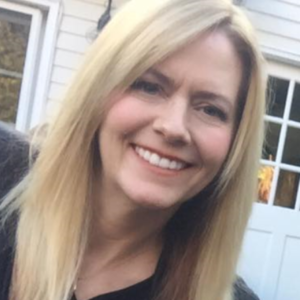 Kelly Ann Gleeson, 53, of Rye, NY, passed away Wednesday, April 20, 2022. Daughter of Bill and Sally Gleeson (nee Conneely), Kelly was born in Jersey City and lived briefly in Weehawken before moving to Glen Ridge, NJ, at an early age. She attended Glen Ridge High School and graduated from Caldwell University in 1990. Additionally, she earned a Master’s Degree in Theology from St. Joseph’s College in Yonkers, NY.

Named after Pop Kelly, her paternal great-grandfather, Kelly embraced his kind-hearted spirit and thoughtful nature. As a child, she bounded her way toward championships in Irish step dancing, a skill found later valuable at family weddings. With four older brothers and countless cousins, it wasn’t surprising when Kelly blazed her own path in sports. At GRHS, she excelled on the softball diamond and hardwood before moving onto Caldwell where she parlayed four years of college basketball into a Hall of Fame nomination.

Her professional life cast her into Manhattan, where her modeling and acting career took flight in Broadway shows and movies, stopping eventually behind a desk at HBO headquarters. It was at that moment when Kelly’s service to the church and the flowering of her Catholic faith took centerstage. Her saintly devotion and prayerful soul was rivaled only by her radiant smile.

Kelly was predeceased by her mother, Sally (2008) her brother, Danny (2010), and her dad, Bill (2019). She is survived by her beloved David, and three brothers: Bill and his wife Donna, Sean and his wife Lisette, Brendan and his wife Michele; her sister-in-law, Mary Beth; and ten nieces and nephews, Sean, Liam, Haley, Sara, Michaela, Brendan, Daniel, Owen, Maggie, and Dylan. And of course, her three great nephews Eamon, Patrick, and William will forever cherish their Grauntie Kelly.

In lieu of flowers, donations in remembrance of Kelly can be made to St. Joseph’s Seminary and College. Funeral Mass at 10 am on Saturday at Sacred Heart Church, Bloomfield, NJ. Internment at Gate of Heaven Cemetery, East Hanover, NJ.