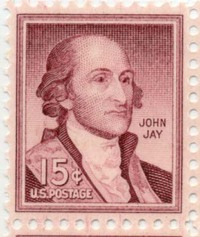 Continuing our week of American History, John Jay, also a founding father of our nation, is a Rye notable. With numerous roles in American history, Jay is best know for serving as the first Chief Justice of the Supreme Court (appointed by George Washington) and as one of the three authors of the Federalist Papers, along with Alexander Hamilton and James Madison. 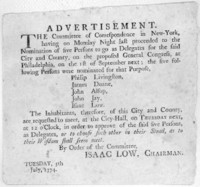 (PHOTO: John Jay’s Nomination to the 1st Continental Congress, courtesy JohnJay.net) Jay lived in Manhattan and his family maintained a farm in Rye. The site is now a National Historic Landmark and is open to the public. The Jay property sits adjacent to the Marshlands Conservancy and won its preservation in the 1990s after a bitter battle with local developer Diane Millstein who wanted to knock down the Jay home and develop homes on the surrounding 23 acres.

The Jay Center describes some of John Jay’s accomplishments:

"Few men had more influence on establishing the United States than John Jay. He served in an array of high offices including President of the Continental Congress and Secretary for Foreign Affairs. As a negotiator of the Treaty of Paris, which ended the American Revolution, Jay insisted that the British negotiate with the United States of America, rather than with thirteen colonies.

Jay is best known as the first Chief Justice of the U.S. Supreme Court and as one of the three authors of The Federalist papers, along with Hamilton and Madison. Jay’s persuasiveness was a significant factor in securing ratification of the Constitution.

John Jay grew up on the Jay Heritage Center property. Although it was inherited by his older brother, the Rye farm remained a place of refuge for Jay throughout his public career. Jay’s son replaced his father’s boyhood home with the 1838 mansion, which is considered a masterpiece of the Greek Revival style."