Publisher’s Note: Over the next couple of weeks we will profile a couple of the people that report on Rye. Our first profile is of Chris Falcone of The Rye Sound Shore Review. Chris and The Rye Sound Shore Review were recognized this month at the New York Press Association 2007 Better Newspaper Awards. Chris was awarded for In-Depth Reporting, and netted the highest honor in the Spot News Coverage category for his coverage of the 2007 floods. Our congratulations to Chris for the insights he brings to the place we all call home.

Your Day Job:  I serve as the lead reporter of The Rye Sound Shore Review. I write, on average, five to seven stories weekly, take many of the photographs to accompany those stories and have recently begun designing the layout of the front page of the paper. 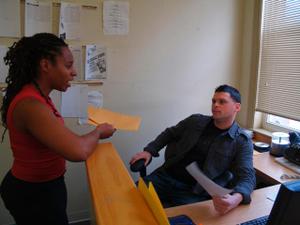 MyRye.com: How many people work for your Rye paper?

There are several faces that put in an enormous amount of time and effort to produce The Rye Sound Shore Review. Managing Editor Lynda Wissing spearheads the weekly process of putting forth a quality paper along with help from Assistant Editor Dan Gabel. What makes their job so demanding is that they oversee all five papers during production. Bernie Rosenthal is the art director who focuses his entire efforts on Rye. And, unfortunately, he was set to design his last paper with the April 11 edition, prior to retiring after a lifelong career in the industry. Thank you for all your work Bernie.

How long have you worked for your company and what did you do before?

I have just completed my first year working at the paper. I graduated from Hofstra University with a B.A. in print journalism in 2005. While there I found a passion for writing and reporting and after trying to break into the industry for nearly a year I finally landed an opportunity with Home Town. Prior to finishing school and finding my career path I worked for a local moving company, Collins Bros., in Larchmont for several years and learned the true meaning of a hard day’s work. To this day it still serves as a constant reminder and motivation of what life could be like; carrying couches up several flights of stairs is not the easiest way to make a living.

What were the three biggest stories in Rye in 2007?

1. Without a doubt the number one story in Rye was the March 2 and April 15 floods which was readily reflected in our continuous coverage, which continues today, of the disaster which local municipalities were burdened with. Those storms, which would make national headlines, also led to an urgency on numerous fronts that quickly became public knowledge and spotlighted throughout the community.

2. Although an issue that has really grown, and will continue to do so, with the onset of 2008, traffic and safety took center stage toward the end of last year with the highly anticipated release of the Trailways Report. That has led to a public discussion throughout the community regarding those recommendations for improvements to specified areas. The city has worked to fast track those recommendations as residents grow increasingly wary over the dangers that lurk within the community, particularly around the MS/HS area.

3. Another story which drew headlines even on a countywide scale was the rash of burglaries that occurred mostly within Rye but also other surrounding municipalities toward the end of 2007. From October 30 to November 28, the city was hit with several burglaries that targeted unsuspecting homeowners during daytime periods. A suspect, Jerry Johnson, was arrested in Mount Vernon and has since been link to some of the burglaries throughout this area. His prior rap sheet was enough to fill out a city council agenda, including being convicted of second-degree murder in 1972.

Other stories of significance were the tragic passing of RHS student Ryan Adamson, the ongoing teacher’s contract saga and the State championships of RHS’ football and field hockey teams.

What are the three most interesting things about Rye that most people don’t know?

1. How long ago flooding concerns first materialized for this area; revealed in the 1940’s but largely ignored by Westchester County leading to what is today a major catastrophe.

2. The MS/HS campus was initially designed, in the 1940’s, for the purpose of having students walk or ride bikes to school and therefore is not prepared to handle the influx of cars that it currently experiences on a daily basis.

3. How dangerous Midland Avenue really is. The problem lies in that it’s a county road and therefore the city’s hands are supposedly tied in terms of improving safety. But, in my opinion, something really needs to be done.

4. Rye is one of 43 municipalities within Westchester County and one of 10,000 governments throughout the state of New York. There is talk of consolidating local governments for the benefit of the financial future of the state, which began under former Governor Eliot Spitzer (D) and is now being continued by Attorney General Andrew Cuomo (D).

What kind of stories do you most enjoy writing about?

To be honest the majority of stories that I report on I enjoy. On occasion an issue might arise that is difficult to write about or I might find boring but that is rare. I’ve enjoyed covering the floods and writing about the rebuilding process from the inside out, evidenced by the nearly 100 stories that I’ve done on that topic. And I tend to learn a little about every issue I cover. One story I grew fond of, personally, was the lemonade stands that the Milton School third-grade students erected to raise money for research of pediatric cancer, supporting a charity known as Alex’s Lemonade Stand. After speaking to the entire third grade class I was touched to find out how much they cared and wanted to help. I believe they raised over $1,000 and donated it to the charity.  Anytime, I cover a cancer-related story it’s memorable after losing my mother to that disease when I was 21; which continues to live with me to this day.

How does someone subscribe or get a copy of your paper?

The Rye Sound Shore Review is published 51 times a year. If you’re interested in subscribing you can contact our Subscription Coordinator Dori La Valle at 914.653.1000 ex. 25 or Dori@hometwn.com. You can also view us online at www.hometwn.com. Otherwise, you can pick up a copy at several locations including City Hall, The Rye YMCA and The Rye Free Reading Room to name a few and most recently at one of our ten red display boxes located throughout the Central Business District. I’m sure you’ve seen them.

Al Roker of NBC's Today Show shouted out a Rye centenarian milestone this past Tuesday, September 27, 2022. Muriel Antokal of Rye turned a...
Read more
Church of the Resurrection