Sandy Samberg is the team captain of the Rye Sole Ryeders, a Rye based group of moms scheduled to walk in Avon’s 40 mile Walk for Breast Cancer New York on October 4th and 5th. In its second year, the Rye Sole Ryeders has 62 women registered for the walk, almost double the 37 that walked last year.

Samberg submitted the following update on the walk preparations to MyRye.com. Do you know one of the walkers? See the list at the end of the story and post a comment with your words of encouragement.

I decided to embark on the 40 mile adventure in memory of a friend who lost her battle with cancer in 2006 and in honor of another friend who had recently been diagnosed with breast cancer. In response to my fundraising letter, two friends of mine (Laura DeVita and Maiju Savage) joined me for the walk, in honor of those they knew who had also been affected by the disease. While trekking the 40 miles, we talked about how much other women in the community would benefit from the experience and decided to form a team from Rye. Naming ourselves the ‘Sole Ryeders’, we began a grassroots effort to recruit others to join for the 2007 walk. The 2007 team was ultimately comprised of 35 walkers and raised over $130,000!

Proud of our accomplishments, but not wanting to stop there, the team has grown this year and has over 60 registered walkers! We’ve changed our name to ‘Sole Ryeders & Friends’ to reflect the involvement of those who live in other communities but joined the team through friendships with Rye teammates. Currently, the Sole Ryeders & Friends are ranked #1 in fundraising out of the 465 teams registered for the NY Avon Walk for Breast Cancer. Our fundraising success has been achieved through the support of friends & family, a variety of team-organized fundraisers, and the generosity of local businesses. 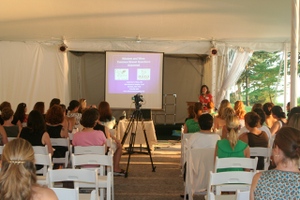 (PHOTO: Samberg at a June fundraiser) While the team has grown over time, so have our goals. The Sole Ryeders & Friends are continuously fundraising, participating in the 40 mile walk each October, and we’re also committed to building awareness around prevention, diagnostics and current treatments for breast cancer. The team hosted a fundraiser in June called ‘Wisdom & Wine’ which featured Dr. Cathy Giess, a prominent breast radiologist and Rye mom of four, as their speaker. Dr. Giess educated the crowd about the importance of early detection, signs and symptoms of breast cancer, and the pros and cons of various diagnostic tests.

The event was extremely successful as a fundraiser and also as a means of educating the community about a topic that has widespread importance. Additional fundraisers scheduled for September include ‘Walking Women & Wine’ picnic night and bake sales at Rye Youth Soccer on September 20th and 27th. Team members involve their children in the bake sales as a way for them to be a part of the experience.

Many have asked how they can support the team, so this year the Sole Ryeders & Friends decided to pursue local sponsorships. "We were honored to receive such positive feedback from local businesses and the donations have helped several team members reach the $1,800 fundraising minimum required for each walker to participate," said Lynn Halpern, a two year Sole Ryeder. The logos of these businesses will be prominently displayed on the team shirts and at the team-organized fundraisers. They include Mira Women’s Imaging, Sotheby’s, Coldwell Banker Country Properties, Paul Shainberg Architects, Crocs, Blush, Parkers, HealthSource, MyRye.com, Rye Racket, Panache, Lola, Morgan’s, and the Bar Method.

Walking 40 miles doesn’t happen without a significant amount of training. Team members have been busy clocking in the miles throughout the summer. In addition to individual training, the Sole Ryeders & Friends have weekly team training walks throughout Rye, Harrison, Port Chester and Rye Brook.

The Sole Ryeders & Friends are busy gearing up for the October 3-5 weekend, which includes a carb-loading team dinner on Friday night, a marathon of walking on Saturday, camping out on Randall’s Island Saturday night, and finishing with a half marathon walk on Sunday. While many members of the team did not know each other prior to registering for the walk, the preparations for the weekend have brought them together. Paths have crossed that wouldn’t have otherwise intersected and the camaraderie that has developed within the community surrounding this event has been remarkable.

The Sole Ryeders & Friends are extremely grateful to all of those who have attended the team’s events and/or supported the team through donations and sponsorships. Without this help from the community, the team would not be in the strong position that it is today. We look forward to representing Rye while walking the cumulative 2,480 miles and making a difference in the fight against breast cancer.  If you would like to learn more or have any ideas for the team, we can be reached via email at soleryeders@gmail.com.