The Westchester Triathlon, held annually at Rye Town Park, is one of my favorite Rye events, right up there with the  Rye Little League parade on Purchase Street. Although it has been around for a while, the participation and status of the triathlon has grown significantly in the past three years under the sponsorship of Rye based Jarden Inc., according to triathlon chairman and Rye resident Phil Gormley, who has been involved with the triathlon for 15 years, and whose passion and dedication has helped transform the event into the premier event that it is. This year’s event will be held on Sunday, September 21st. 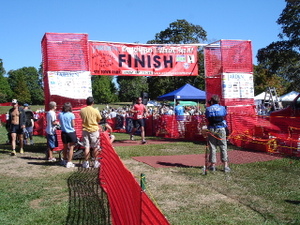 Starting at 7:00 a.m., athletes are called in waves to swim 9/10ths of a mile in the Long Island Sound, jump on their bikes for the 25 mile bike course through Rye, Harrison, Port Chester and Connecticut, including the rigorous "Claire’s Climb" in Greenwich (yes, I’ve done it!), followed by a 6.2 mile relatively flat run through Rye culminating on the Rye Playland boardwalk. This year the committee is adding "Mike’s Hill" on the run course, in honor of Rye resident and active Westchester Triathlon participant Michael Swain and his family.  A truly inspirational person and father of two, Michael passed away on June 21st of this year from pancreatic cancer. 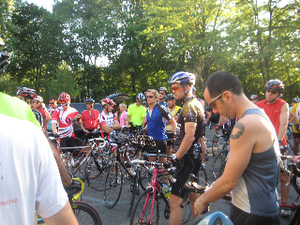 (PHOTO: The Altheus fitness center ran a warm up race with over 100 bike riders on Sunday, September 7th) Athlete participation has grown from 200 to 1,200, where it is capped to keep it community friendly and safe, with all proceeds going to charity. Over $1,000,000 is raised through the race for multiple charities including the Leukemia & Lymphoma Society, Challenged Athletes Foundation, Friends of Claire fighting ALS (in honor of Phil’s sister, Claire Gormley Collier, a mother of 3 young children, who has valiantly struggled to survive with ALS while pushing for legislative change. See a video of Claire here). LLS’ Team in Training raises funds in exchange for entry, coaching and wetsuits. TNT also provides most of the bike volunteers for the event.

Athletes may participate as individuals or as part of a relay team, and this year’s event sold out in 36 minutes online. It is a regional qualifier for USAT National Championship and the Escape from Alcatraz Triathlon. This year there will be challenged athletes participating, some on wheelchairs and/or with prosthetics. Local resident Ray Kelly runs the thriving Rye YMCA Triathlon Club with over 70 members, and it is open to all. The Jarden Westchester Youth Triathlon (ages 7 to 14) is still open and takes place Saturday, September 20th at 8 a.m.

An event of this dimension relies on as many volunteers as possible. Community Service is given for the schools, and volunteers are needed for the whole weekend. Volunteers can sign up at www.jardenwestchestertriathlon.org.