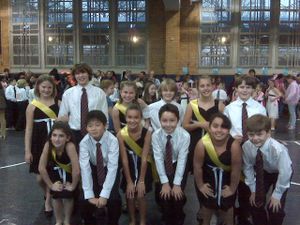 Osborn Elementary School Principal Ms. Clarita Zeppie introduced the American Ballroom Theater's Dancing Classroom's program to Osborn school in the Fall of 2005. The program was the inspiration for the 2005 documentary, Mad Hot Ballroom, and Ms. Zeppie was featured in the film as a former principal at PS 115 in Washington Heights that went on to win the Grand Final Competition.

The children compete in a variety of ballroom dances: the Foxtrot, Merengue, Tango, Swing, Rhumba, and take their roles very seriously under the tutelage of their enthusiastic dance instructor, Rodney Lopez. The team was cheered on by their proud parents, teachers, principal, and friends at last night's competition. Let's wish them luck heading into the semi final at PS 69Q in Jackson Heights, Queens on December 11th!

If you missed the movie Mad Hot Ballroom, check out the trailer: