M. Paul Redd and Dorthy Sterling, two individuals with connections to Rye, are worth remembering on this Martin Luther King Day, a day to celebrate the nonviolent civil rights movement. 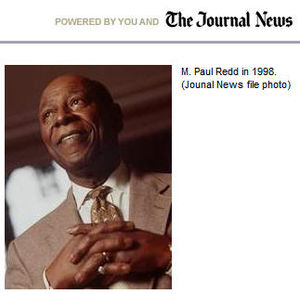 M. Paul Redd, a Rye resident until his death just 10 days ago, was known for his contributions to the African American community in Westchester County. After serving as one of its writers, Redd purchased the the Westchester County Press, the county's sole African American owned newspaper, in 1986. Our Assemblyman George Latimer told Newsday that after Redd began writing for the paper in 1961: Redd "stood up with a strong voice when it was not an easy time to do that." Redd was active politically and served as president of Westchester Black Democrats and president of the Westchester-Putnam Affirmative Action Program, according to his obit in LoHud.com

Redd was the subject of a 1993 profile in The New York Times:

"…"I first got involved with the paper in 1971, when on the basis of the work I was doing for the civil rights movement — my wife, Orial, and I started the N.A.A.C.P. chapter in Westchester in 1954 — the Adamses asked me to write a column for the newspaper, 'M. Paul Tells All,' which I am still writing."

In addition to writing and editing, Mr. Redd also calls on potential advertisers, lays out the paper every Monday evening and mails it to its 10,000 subscribers. The work on the paper is done after 5 P.M., in a room in the Urban League Building in White Plains behind the Affirmative Action office where Mr. Redd is president and chief executive officer of the Westchester/Putnam Affirmative Action Program….

The mandate of the paper, he said, is to focus attention on the issues and concerns of black people in Westchester. "We tell it like it is. Our readers know they are getting the story straight, not an interpretation from the general press. We cover topics that are important to the black community: namely, housing, jobs and education. We stay away from sensationalism. We never print crime stories."" 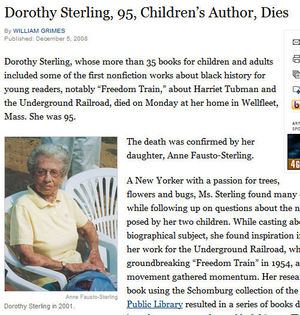 Dorthy Sterling, a noted Jewish author of African American children's literature, including Freedom Train: The Story of Harriet Tubman and over 30 other titles, died on December 1, 2008. Her obit in the LA Timessaid she was "a significant figure in 20th-century children's literature for her lucid, well- researched portrayals of historical African Americans written decades before multiculturalism became mainstream." The same article also referenced her connection to Rye:

"Sterling and her husband joined the NAACP in suburban Rye, N.Y., where they had moved after the births of their children, and helped to expose landlords who refused to rent to blacks. In 1961, after their college-student son joined the Freedom Riders in the South and was arrested in Jackson, Miss., someone burned a cross in their frontyard."