They have gone tribal on Shore Road in Greenhaven. 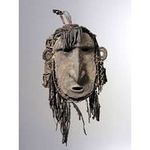 Inside the home of John and Marcia Friede, heirs of the Annenberg publishing fortune, is a collection of nearly 4,000 art objects from Papua New Guinea. It is one of the greatest private collections, according to the San Francisco Chronicle: "The array, which includes masks and ritual headdresses, is considered the world's most important private collection of objects from Papua New Guinea."

The collection is also at the center of a family dispute that could endanger the artwork from joining over 400 items from the collection that already been installed as part of the Jolika Collection at the M.H. de Young Memorial Museum in San Francisco. Friede donated all the works to the San Francisco museum but apparently also used the works as collateral in an agreement with his brothers. Apparently he still owes his bros $6 million.

John Cote at the San Francisco Chroncile has has filed a number of stories on the dispute:

"Friede and his wife, Marcia, have pledged almost their entire collection to the de Young, including about 400 pieces already at the museum and thousands more at the couple's home in Rye, N.Y. But Friede also put up the artwork as collateral to settle the dispute with his brothers over the estate of their mother, Evelyn A.J. Hall, who died in 2005 and was the sister of publishing tycoon Walter Annenberg."

"Estimates of the value vary, but the 400 items at the de Young are insured for more than $90 million, a city official said. They take up more than a quarter of the museum's permanent exhibit space, and their inclusion at the de Young's Golden Gate Park building that opened in 2005 was hailed beyond the Bay Area in art trade publications and the New York Times.

"It's truly one of the most unique collections of its kind anywhere in the world," said John Buchanan, director of the Fine Arts Museums of San Francisco, which includes the de Young. "They have made the de Young really one of the great centers for the study and appreciation of Papua New Guinea art. It's a tremendous jewel in the crown of the city's museums.""