In this edition of Pamela on Purchase, MyRye.com columnist Pamela Baur tells us about week one managing the new lululemon athletica rye showroom on Elm Street.

Certainly not my first bump in the road but undoubtedly the most painful was when I walked into a clothing rack at the store today and nearly poked my eye out. I took it as a wake up call to get out of my mood and be open to taking on the day and all the new responsibility and tasks I had at hand. With the opening of the showroom last week, I have been noticing where my biggest challenges will lie. *(now added to the list how to cover up my shiner). 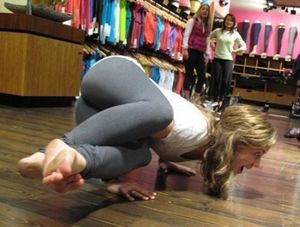 At first I thought it would be in hiring great people, that turned out not to be the case and am fortunate to be surrounded by a fantastic team and wonderful leadership. Then I thought my greatest challenge would be finding toggles strong enough to hold our clothing racks to the wall as they were falling out the night before we were opening! And in the end was graced with a local handy man Chuck and his wife who so generously came to contribute and fix the hanging system.

I see my greatest challenge with taking on this role and opening a business is to be greater than I have ever been before. 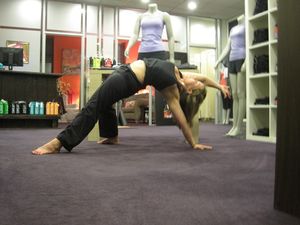 Opening day of the showroom I woke up knowing I had to be different than who I had been being in my life here in Rye. I had a realization that life was suddenly different – similar to the feeling of having a child I’d imagine – waking up and realizing life as you’ve known it won’t really be the same and there’s a heck of a lot more at stake than just myself.

Heavy feelings I know for a day that is equally exciting and landmarks a turning point in my life here in Rye. I am excited to have opened a business and these feelings were simply escorted with the sense of total responsibility – maybe that’s something I have been avoiding. No doubt, what I’m being shown is an opportunity to create boundaries and balance at work and other areas of my life. 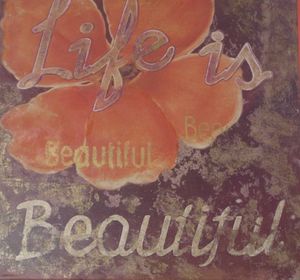 There were three moments when I felt the most inspired and on track during opening weekend. The first, playing the cd of Jon Simmons - a local Greenwich musician – and listening to a song from his cd called “I got this feeling and it’s good”. As I was re-hanging the racks that fell off the wall, the words from this song encouraged me to pull through “I don’t know, I don’t know, I don’t know, but I got this feeling and it’s good” –beneath the feelings of angst and chaos, and struggle to hold 40+ pounds of luon from crashing to the floor, I had this feeling…and it was good.

The second was when 20+ people were gathered at our space to practice yoga at 7pm on a Friday night. As I flowed through the practice led by local instructor Laurie Jordan, I realized what an impact the store in Rye will have and how lovely it was to have brought people together in this way.

The third best part of my weekend was of course the moment when my experience in Rye transported me back to Italy. Italy was my home three years ago before moving to Rye and when I have moments here that have me as inspired as when I was there, I know my heart is in the right place. As I left the showroom Sunday night, the streets were rained upon and glistening from the street lamps lining Purchase Street. I walked passed Starbucks around the corner to my car noticing that the streets weren’t just wet, they were sparkling the same way they were as I walked the streets of Florence…the streets were sparkling with possibility.