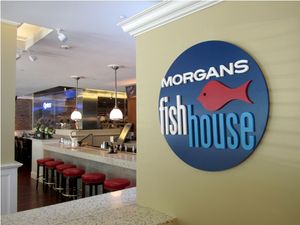 Opening again in May after a four-week renovation, the new Morgans Fish House relinquishes its old position as the special occasion place in the Pearl Restaurant Group (owners of Rye Grill and Bar and Ruby's, among others) portfolio and fully admits it competes squarely with its sister restaurants.  Even the menu, complete with sliders and a raw bar, is reminiscent of its "competitors" (Rye Grill and Ruby's respectively), but why mess with a good formula? 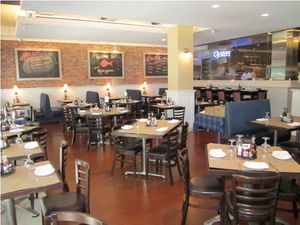 The theme is comfort food, reinforced by the change in decor from a sleek modern design with linen tablecloths to one of exposed brick, homey black and white photos and tables covered in plaid cloth with a craft paper overlay.  Specials and oysters of the day are noted on the blackboards throughout the two plus rooms, though quite possibly the hallway between the front and back rooms deserves more than a "plus".  It may just have the best seats in the house, with comfy banquettes lining the walls with a view of the open kitchen — that is, as long as it's not blocked by those sitting in bar stools at the kitchen counter, diner style. 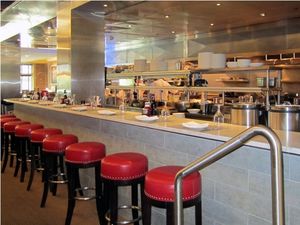 Also reinforcing the more casual vibe is the move toward a less composed menu made up of manageable chunks.  Sure, there's a section for appetizers, entrees, and desserts, along with the aforementioned raw bar and sliders (5 varieties), but there are also sections for salads, sandwiches, 5 different kinds of mussel preparations, and a long list of sides, including the "Chef's Whim", positioned as a side du jour.  French fry fiends (counting myself in this category) can choose from four different options:  plain, parmesan, truffle black pepper and old bay.

Blue Plate Specials, priced at $16.95, vary by day and are surprisingly mostly meat options (5 out of 7 days), like Wednesday's Southern Fried Chicken and Sunday's Prime Rib.  But bargain hunters may want to drop by on Tuesdays, when you can combine the BBQ plate of ribs, sausage and pulled pork with $1 oysters and 1/2 price margaritas.

Fish lovers shouldn't despair, however.  There are plenty of fish options; just check the blackboard listing the fresh catches of the day. 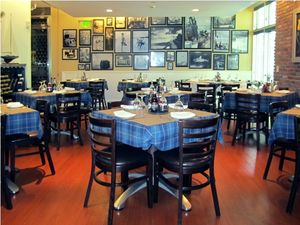 No kids menu, but Lisa McKiernan, the Morgans Managing Partner, notes that the menu is full of kid-friendly items and that even off-the-menu grilled cheese and other kid faves are available for the asking.

Most non-main items are priced in the $9 – $16 range, with the sandwiches being on the higher end, most notably for the $21 surf and turf lobster roll & Philly Cheesesteak, though you can understand why based on the ingredients. The mains range from $18 – $34 with the vast majority in the $20s.

With 100 choices on the wine list, Morgans deserves kudos for covering a wide range of price points – from $28 – $450 per bottle, all appearing to be marked up by the standard amount (no bargains detected). There are some interesting selections that are off the beaten path, but the list is predominantly – about 60% – Californian.

Let's try to support our Rye restaurants by giving the new Morgans a try – not just for your Saturday night, but for your weekday/night drinks with friends, casual lunches, and family dinners.  See you at the bar (eating french fries).

No Garnet rating yet – we'll save that for the next visit.

A plate of pancakes at On the Way Cafe or a nice deli sandwich from Playland Market always goes down easy. But pulling into...
Read more
Community Groups

Eating Rye is an occasional feature to meet the chefs and other professionals in the restaurant kitchens across Rye. When you dine-in, pick-up or...
Read more