If you’ve read my posts you know I pay attention to signs. Even if I do interpret them as I see fit, when signs come up I do TRY to pay attention. This had me think it was funny when Jay (publisher of MyRye.com) asked me what I thought of the stop signs in town.

I thought to myself, “I don’t like to slow down let alone STOP!” and my driving is pretty reflective of how I go about life! 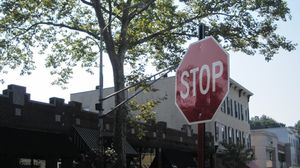 Growing up I learned the more I do, harder I work, and faster I go the better off I’d be. So the whole yield, stop, obey commands have never worked for me unless they were aligned with what I wanted.  I will say this is not always a winning formula and the persistence I’ve applied to some areas creates more resistance than avail.

So, in looking at what’s come up in the past few weeks, I’m inviting myself to listen and pay attention to the signs around town on Purchase Street.

One sign that popped up last week was a fellow writer in Starbucks who taught me a new writing style called Cinquain Poetry, which is a 5 line poem, pretty simple and so to the point there is only room for intentional words to be included. The messages can then be to the point and intentional communicating an idea or a vision. He told me practicing this style of writing helps to stream line what one says, even in their day to day speaking, it’s a practice to stay focused and clear around one image, one message. So around signs I could say…

If the cinquain style of writing will lend itself to cut away what isn’t needed and have me more intentionally focused on what I wanted to keep in my messages, I’m all for it, I’ll start speaking in cinquain to simplify and let go of all the extra and unnecessary over thinking , over working, over doing.

It’s in the simplicity and in the pause of stopping that allows for the clarity and space to again feel what it is to experience GO.

More of Pammy’s poetry to come, keep checking back!