It was not so long ago that the Rye City Council had Rye PD cars drive around the city Friday nights before a council meeting with relevant meeting papers. 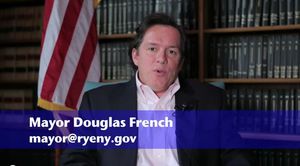 Now, Rye Mayor Doug French has taken to YouTube. The Mayor's updates – which we usually run here at MyRye.com under a heading "Speaking French" are now available in video format. Well, at least one is. Provided the mayor keeps this up, we'll carry them here on MyRye.com for your viewing and commenting pleasure.