Home Food Take a Bite of a Classic!
Food

Take a Bite of a Classic! 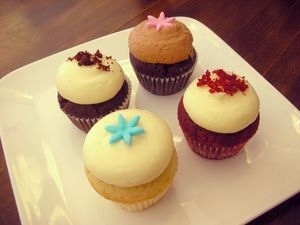 Yum… the classic, warm, inviting smell of baking cupcakes.   Who wouldn’t want to know more about them?  So I sat down with Keyes Clemmer, the Executive Pastry Chef and owner of 350 Classic Bakeshop, and her colleague, pastry chef Brittany Soto, to learn more. 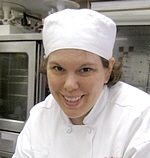 Keyes:  Because I’ve lived here for a year and a half.  When I moved here I was working at other restaurants and pastry shops, but then I decided to open my shop and do something for me.  Plus, there was a need in Rye; there’s nothing else like this.

Why Cupcakes, as opposed to cookies, cakes, pastries, as a focus?

Keyes:  Cupcakes are fun!  Plus, we’re not limited to cupcakes.

Brittany:  We would go crazy if we just made cupcakes!

Keyes:  Cupcakes are the social cake.  They add an element of fun.  Plus, in this economy they’re less expensive.  Cupcakes are affordable indulgences.

What made you, Brittany, want to work at 350 Classic Bakeshop?

I saw an ad to work here, and it was a new venture.  I’ve never had an experience like this, and I thought it would be interesting to learn the ins and outs of a new baking business.  It is a new experience in a new environment and community.

What is your baking background?

Keyes:  Well, I was a savory chef for twenty-five years, and then switched to pastries a few years ago.  Pastry chefs, before, weren’t given much attention, but now there’s a lot more awareness of how important pastry chefs are.  Honestly, anyone can be a chef, but what we do is a science.  We can’t just add more salt, wine, and ingredients, because recipes are formulas.  There are certain mathematical equations we follow, and certain rations that we have to calculate.  And, sometimes things do happen by accident, and we embrace them!  There’s a lot of fun in pastry; I like to create.

Brittany:  I started out at vocational school, and a class that really stood out to me was in desserts.  I enjoyed making desserts and being creative.  I then went to a community college for a bit to see if I still had a passion for baking, and then went to Johnson and Wales University for a degree in Pastry Arts.

How’s Rye been to you, and how long have you been open for?

Keyes:   We opened in September, and so far it is going well.  We need to grow, but we’re new and still getting the word out.  We have many ideas about getting involved in the community, and one thing that we are thinking about doing is having a class of 2012 cupcake.  Basically the class of 2012 would vote on a cupcake flavor, and every time we sold a cupcake, we would donate some proceeds to the class of 2012 for class activities.  We want to do this for every graduating class, from Rye High School to the elementary schools!

On your website, it mentions that you throw birthday parties and teach classes.  Can you tell us about them?

We have parties for all ages, and besides having parties at the shop, we also do offsite parties.  We have cupcake camps and cupcake wars going on now too.

Do you have any special plans/programs for the summer?

We really want to teach a series of baking classes for people ready to take baking and decorating to the next level–classes for teens and adults.

Besides your cupcakes, what other goodies do you sell?

We have push pop cupcakes [I tried one, and it was delicious!!], brownies, tarts, frosting spoons, assortments of cookies, and baked goods.  We also have cupcake sandwiches that were inspired by whoopie pies.  Sometimes, we have cupcake truffles, and in the winter we have cupcake snowballs.  On Sundays, we do Sunday brunch cupcakes, like banana French toast cupcakes with a blueberry reduction, and a maple bacon cupcake, which is a brown sugar cupcake with maple frosting and deglazed bacon with maple syrup.  We don’t have a set schedule, and we are always trying new things.  We have cupcake flavors of the day, and on Tuesdays, we have the secret flavor of the day that we post on Facebook and Twitter.  We tell people the password, and if they know the password, we give them the cupcake for free. We do this from 2:30 until we run out.  We also have a lot of seasonal things.  We just finished Valentine’s Day and now we are starting to look for fun St. Patrick’s Day ideas!

Jacqueline Beveridge is currently an ninth grader at Rye High School. She moved to Rye in 2007 after living in England for nearly ten years. Jacqueline enjoys reading, writing, traveling with her family and hiking.

Eating Rye is an occasional feature to meet the chefs and other professionals in the restaurants across Rye. When you dine-in, pick-up or call...
Read more