Multiple couples will be wed in a mass ceremony in Rye Town Park next Friday, August 3rd, 2012. 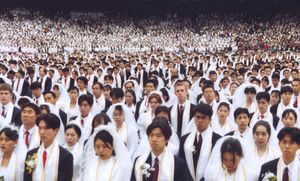 As part of an outdoor theater production of Shakespeare’s “Much Ado About Nothing,” organizers are inviting couples to participate by renewing their vows as part of the evening's event. Already four couples have signed up, according to LawnChair Theatre organizer Ann Peterson.

Married couples of all ages are invited to renew their wedding vows in front of friends, family and a live theatre audience as part of the Lawnchair Theatre Company’s August production of Shakespeare’s “Much Ado About Nothing.”   Couples can sign up to be included in the Rye Town Park outdoor evening production set for Friday, August 3rd at Rye Town Park. The show begins at 5:45 pm; attendance is free with a suggested donation. 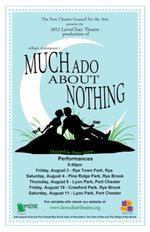 “Much Ado About Nothing” is a fast-paced romantic comedy of misunderstandings, subterfuge, rumors, mind games and an eventual happy ending featuring a double wedding celebration.

At intermission, director Peter Green will invite participating couples to join him and Rye Town officiants including Rye Town Supervisor Joe Carvin, Rye Brook Mayor Joan Feinstein and Port Chester Mayor Dennis Pilla onto the set for a picturesque group vow renewal ceremony inspired by the participating couples, whose names and years married will each be announced. Looks like Rye Mayor Doug French did not qualify as an officiant…

“We supply the officiant, costumed revelers, a romantic setting, music, flowers for the bride and wedding cake for the crowd,” said Green.  “The couples supply the love, inspiration and true romance.”

Want to get married at the show? Sign up.

Wedding cake won't fill you up? Want to picnic and watch your neighbors get married? Order a picnic (48 hours in advance) with Cafe Mirage (an excellent choice!).

Oh yeah, there is a Shakespeare play too.