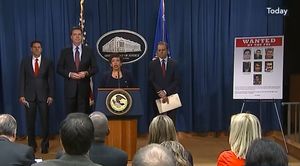 (PHOTO: The big guns were rolled out at a DC news conference to announce the indictments against the Iranian hackers. Left to right: Assistant Attorney General for National Security John P. Carlin, Director James B. Comey of the FBI, Attorney General Loretta E. Lynch and U.S. Attorney Preet Bharara of the Southern District of New York.)

The US Attorney Loretta Lynch rolled out the big guns at a DC news conference Thursday to unseal an indictment against seven hackers in cyber attacks aimed at US financial institutions and the Bowman Avenue dam (see MyRye.com prior stories here). 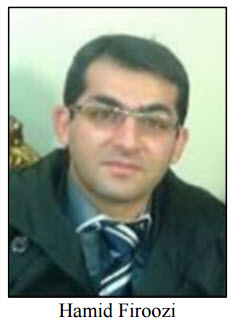 The seven attackers were charged with hacking 46 financial institutions over 176 days between 2011 and 2013. Only one defendant, Hamid Firoozi, age 34, was changed with the Bowman Avenue dam cyber attack. Firoozi was charged with hacking the SCADA (supervisory control and data acquisition) system of the Bowman Dam in August and September of 2013.

Although the dam is located in Rye Brook, New York (the majority of news stories seem to have this incorrect, placing the dam in Rye), the system to control the dam's sluice gate is controlled by Rye City. 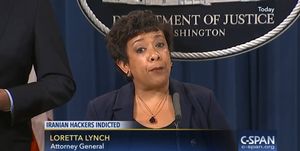 In the news conference, AG Lynch said the dam attack was "an outcome that clearly could have posed a clear and present danger to the public health and safety of all Americans". She publicly thanked (among others) the City of Rye for its cooperation (see the four minute mark in the video below).

In a statement, the Justice Department said the following on the Bowman attack:

"Between Aug. 28, 2013, and Sept. 18, 2013, Firoozi repeatedly obtained unauthorized access to the SCADA systems of the Bowman Dam, and is charged with one substantive count of obtaining and aiding and abetting computer hacking. This unauthorized access allowed him to repeatedly obtain information regarding the status and operation of the dam, including information about the water levels, temperature and status of the sluice gate, which is responsible for controlling water levels and flow rates. Although that access would normally have permitted Firoozi to remotely operate and manipulate the Bowman Dam’s sluice gate, Firoozi did not have that capability because the sluice gate had been manually disconnected for maintenance at the time of the intrusion.

Remediation for the Bowman Dam intrusion cost over $30,000."

This is the first time we have seen the $30,000 cost number. It is unclear if that cost was borne by Rye City or others.

Firoozi and the others face a maximum sentence of 10 years in prison for conspiracy to commit and aid and abet computer hacking. Firoozi faces an additional five years in prison for obtaining and aiding and abetting unauthorized access to a protected computer at the Bowman Dam.

In other comments, U.S. Attorney Preet Bharara of the Southern District of New York said “The charges announced today respond directly to a cyber-assault on New York, its institutions and its infrastructure…  The infiltration of the Bowman Avenue dam represents a frightening new frontier in cybercrime. These were no ordinary crimes, but calculated attacks by groups with ties to Iran’s Islamic Revolutionary Guard and designed specifically to harm America and its people. We now live in a world where devastating attacks on our financial system, our infrastructure and our way of life can be launched from anywhere in the world, with a click of a mouse." (See around the nine minute mark in the video below.)

More information as we get it… what do you think? Leave a comment below.