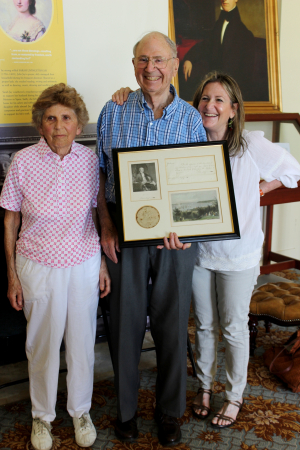 (PHOTO: John Adler, formerly of Rye, has donated a letter written by John Jay in 1797 when he was NY governor about the protection of NY harbor, to the Jay Heritage Center.)

About seventeen years ago, inspired by the purchase of several volumes of a popular 19th century journal, John Adler had an idea – make the American narrative more accessible to the public. So upon his retirement, the former advertising executive launched a multi-year endeavor to create a database of articles, images and ads scanned from the iconic Harper’s Weekly Magazine. Harper’s was the premiere chronicle of political events and literary commentary of its day, and Adler’s invention would help readers navigate thousands of stories from 1857 to 1916. 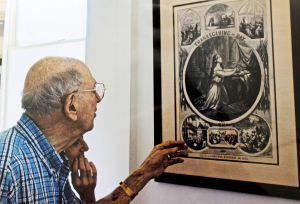 (PHOTO: John Adler and his sister look at Harper's Weekly illustration in the Jay Mansion.)

One could find everything from headlines about Lincoln’s election to Thomas Nast’s cartoons denouncing slavery. This online trove christened “HarpWeek” was further complemented by academic essays and materials for educators. In 2003, Adler’s searchable scholarship “HarpWeek Presents Lincoln and the War” won recognition from the prestigious Gilder Lehrman Institute and an E-Lincoln Prize.

More recently, Adler’s devotion to making history accessible brought him to Rye. A friend of Adler’s attended the John Jay Medal for Service Dinner this past June; he told Adler about the Jay Heritage Center, its efforts to preserve John Jay’s legacy in his hometown, and its growing collection of Jay letters and artifacts.

Adler had in his possession an original letter from Albany signed by Jay in his first term as Governor of New York State; the manuscript had belonged to his parents, Helen and Morton Adler, who had lived for more than 40 years on Purchase Lane in Rye. Now a Greenwich resident, Adler decided to give the historic document to the Jay Heritage Center. His family and sister Dotsy Potter were enthusiastic about the decision.

The letter, dated January 19, 1797, helps illustrate Jay’s efforts to expedite funding for new military structures on Governor’s Island at a time when Americans feared a war with France; “For the information of the Legislature I have the Honor of laying before you Copies of certain Papers on the Subject of Fortifying the Harbour of New York.” As Governor of his state, Jay also served as Admiral of the Navy for New York; his focus on protecting Manhattan’s port had been born during the Revolutionary War and remained a priority. On February 24, 1797,* still awaiting word from the Legislature and anxious about New York’s vulnerability, Jay wrote to a colleague, "I am strongly impressed with the importance of our being always in a state of defence." Thanks to his unwavering commitment, construction of a military structure later bearing his name, Fort Jay, moved forward. Today the star shaped military post is part of a National Monument and attracts thousands of tourists each year.

John Adler’s meaningful gift is framed with another valuable artifact, a wax impression of the first Great Seal of New York. This official emblem was designed by John Jay, Gouverneur Morris, and John Sloss Hobart and frequently attached to important transmissions. Introduced in 1777 and used until 1798, the seal’s design features a rising sun over mountains; these very same elements appear on a shield that is part of the magnificent Trophée d’Armes sculpture that crowns the front gate of Fort Jay.

"I had public service in mind…I wanted to make this content available to people,” Adler explained to a reporter who asked about his inspiration for HarpWeek. Once again, with public service in mind, Adler’s generous gifts to the Jay Heritage Center make another chapter in US history more accessible to the public. The 1797 letter from Governor Jay and wax seal are now on display at the Jay Mansion and can be seen during tours on Sundays from 2pm – 5pm.