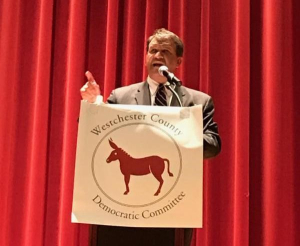 Rye's George Latimer had swept up the Democratic party nomination for the County Exec race this fall.

The PR from his campaign:

Latimer urges unity to defeat Trump-supporting Republican incumbent out of touch with the needs of Westchester families; will build on strong momentum for victory in September and November

WHITE PLAINS, N.Y. – Vowing to restore the focus of the office of Westchester County Executive on the needs of families after years of statewide politicking and poor fiscal choices by incumbent Republican Rob Astorino, Democratic New York State Senator George Latimer (D – Port Chester) secured his party's nomination to face off against Astorino in the November general election. The victory culminates weeks of coalition-building among the dozens of municipal Democratic Committees countywide that formed the base of Latimer's formidable results, which were tallied in a post-convention meeting this afternoon.

"I am honored and humbled to accept the Democratic nomination for Westchester County Executive," said State Senator George Latimer. "I want to thank county Democratic leaders, members of the various local committees and our entire coalition of supporters for their hard work and their trust in me as we move forward to victory in November.

"We have a County Executive who is more concerned with pushing Donald Trump's divisive agenda and furthering his own statewide political career than working for the people of Westchester. We have an opportunity to end Rob Astorino's disastrous leadership and restore opportunity and prosperity to our county. I will build on our growing coalition to bring new voices and new ideas into the process, and be a County Executive that serves the people, and not the other way around."

News of Latimer's victory came this afternoon following a vote tally by party officials at the Westchester County Democratic Committee headquarters in White Plains. Party leaders had initially gathered in the city Wednesday night at the Westchester County Center for a convention to vote to nominate a candidate for the County Executive and other political posts. However, delays in the voting process for local judicial seats pushed the County Executive vote well into the night, prompting officials to postpone the vote count to Friday.

In terms of weighted votes, Latimer received 51,443 to Jenkins' 20,585.5, giving the State Senator a substantial 71.42% of the total tally. Latimer ran the board across large swaths of the county, picking up 100% of the vote for the committees out of Bedford, Harrison, Mamaroneck, North Castle, Pound Ridge, Rye Town, Scarsdale, Rye City, and North Salem. The State Senator also achieved a solid victory in many of the county's cities, picking up 74% in New Rochelle, 81% in White Plains, and 75% in Peekskill.

Most notably, Latimer's final tally included a strong showing in Yonkers, where Jenkins was heavily favored to win. In the end, Latimer held his opponent to a narrow loss of 55% to 45%.

This final count demonstrated deep, countywide support for Latimer, who got into the race late but mounted an aggressive and successful campaign to gather support among the county's 45 local Democratic committees. This earned Latimer the support of a dozen committees and numerous local elected officials. The extent of this support was evident as party leaders stood to nominate Latimer's candidacy at the convention.
"I've seen George in action fighting for the people in our communities. He has shown his kindness and warmth to everyone he meets. He is the leader needed to make Westchester County government reflect the needs of everyone, and not just the wealthy or powerful," said Bianca Lopez, Port Chester District Leader in nominating Latimer.
"George Latimer's vision for Westchester includes a county government that is here to work for all our residents and will advance the progressive values that really make up Westchester," said David Imamura, former chair of Irvington Democratic Committee, who seconded Lopez's nomination.
In his address to the convention, Latimer declared his intentions to work towards unifying the party going into the November election. This, Latimer noted, would be crucial in leading the party to victory in a race in which Democrats hold a 2-to-1 advantage in voter registration over Astorino and county Republicans. At the same time, Astorino faces mounting pressure over the policies of Donald Trump, and criticism from Latimer and Democrats for his inattention to county needs as a past and possibly future gubernatorial candidate.

Latimer also took the time to address the likely primary challenge Jenkins is expected to mount. In an email message sent by the Jenkins campaign in the hours leading up to the convention, Jenkins Campaign Manager Joe Montalto told supporters that the candidate would follow "tradition in participating in the convention," but ultimately intended to break with what he considered the tradition of having the party nominee face a Republican challenger in the general election. Latimer praised the work of convention delegates and welcomed the challenge as an opportunity to strengthen the party.

"The convention process isn't just pageantry; I'm grateful for the Democratic leaders who come together from every corner of the county to voice their thoughts on how to lead this party forward and build a better, stronger future for the whole county," said Latimer. "My opponent plans to continue through the primary, and that's a good thing. Primaries make our party stronger by giving voters choices and encouraging the best candidate to step forward and lead our party to victory. I fully intend to be that candidate, and I look forward to making the case to voters in the coming months."