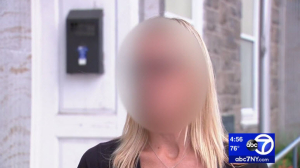 (PHOTO: This unidentified "young Mom" from Rye was the target of a combo online / offline scam with the "porch pirate" showing up at her front door."

Credit card scams are going cross platform in Rye, starting with unauthorized online purchases and ending with a "porch pirate" showing up to claim the illegally procured goods. WABC-TV carried the story: 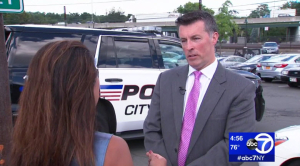 (PHOTO: Rye PD Commish Corcoran said this type of scam is a new one for him, and for Rye.)

RYE, New York (WABC) — It's a credit card scam with a twist. Thieves are making fraudulent purchases with a credit card and then stealing those purchases from the victim's house in Rye, New York.

The only catch, she didn't give herself this pricey purse, a $1,700 Yves St. Laurent classic clutch…

…the purse still showed up from Saks Fifth Avenue via FedEx, and then she got a knock on her door.

"He said, 'Excuse me, I had a package delivered for my girlfriend and it was sent here by mistake,'" she said.

"So you had a face to face with this criminal?" Eyewitness News' Nina Pineda said.

"Yeah, I don't know what his role in it was, but yeah he knocked on my door," she said.

"I told him, no it was not, it had been put on my card and sent back," she said. "He looked at his phone and he acted confused and said, 'Oh sorry,' and walked away very quickly up the block, very quickly."

By the time she got her husband who ran out, the car parked a few houses down took off.

Police say the suspect took off in an older model red Toyota Forerunner. Witnesses say they saw the truck smash its rear window hightailing it away." 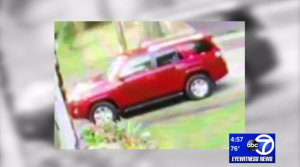 (VIDEO: Watch the video and read the rest.)