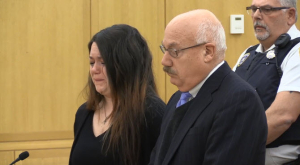 (PHOTO: Emma Fox at her sentencing, as shown in this LoHud video.)

"With a few of her family members and a couple of Schartner's relatives in Westchester County Court today, a tearful Fox said she was sorry as she was sentenced to six months in jail.

“All I can say is how sorry I am. I’m so terribly sorry for what I have done and the pain I have caused,” Fox said through tears after she was sentenced by Westchester County Judge Helen Blackwood.

Schartner’s stepfather, Scott Hall, said his family will never get over the 21-year-old's death. He thinks about Schartner every morning, he said, and, "I can't wait to go to sleep again to rest my broken heart."

“There was no mistake,” he said. “There was a clear choice to drink and drive.”…

Fox glanced at her family in the back of the courtroom as she was led away in handcuffs to continue her stay behind bars. The 26-year-old Rye resident previously agreed to the plea deal that landed her six months in jail for the death of Schartner, a junior lacrosse player who was hit by Fox's car in White Plains on Oct. 9, 2016.

After her jail time is over Fox will have five years of probation. She pleaded guilty on Nov. 29 to second-degree vehicular manslaughter. She could have faced up to seven years in prison on that charge.

Fox also pleaded guilty to a misdemeanor charge of driving while intoxicated and was sentenced to 60 days in jail, which will be served concurrently with the six-month term. She had been free on bail until entering the Westchester County jail on Dec. 20 to begin her term.

The sentence is known as "shock probation," a split sentence involving jail time and probation."