Smart Playrooms, a local business run by Karri Bowen-Poole that building playrooms for the well-to-do, was featured in the NY Post. MyRye.com featured Smart Playrooms back in 2014. 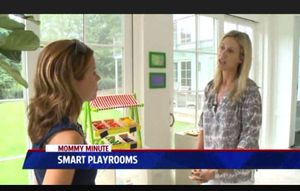 (PHOTO: Karri Bowen-Poole of Rye explaining Smart Playrooms on local television back in 2014.)

"These NYC tots have playrooms that rival some apartments

In local homes, space is always at a premium, but some city parents still find the square footage— and money — to create elaborate playrooms for their children.

Karri Bowen-Poole, a professional playroom designer who founded her business, Smart Playrooms, in 2012, started off mostly as an organizer who sorted and labeled toys, but in the past few years, she’s been working with clients who ask her to create permanent, indoor playgrounds for their kids, with outrageous features such as monkey bars, trapeze rings and rock-climbing walls.

“People nowadays are prioritizing family time and, as a result, they want their children close,”says Bowen-Poole, who is based in Rye, NY. “They’re also worried that their kids are spending too much time with technology. They want their kids to get off the computer and get involved with other activities.”

Here, three local families open their doors to their playrooms.

…Patricia Debiaggi-Mones and Jameson Mones’ love of all things vintage extends to the sprawling 255-square-foot playroom in their four-story, Victorian-era Carroll Gardens townhouse.

Their 21-month-old son, Rye, enjoys a recreation area that is technically the house’s fourth bedroom, and is stocked with throwback toys including a traditional jack-in-the-box, a Paddington Bear, and dad’s original childhood rocking horse. There’s an old-timey gumball machine on display, and even a uniquely retro play kitchen.

The Moneses purchased the home in 2013 but are still renovating, although the playroom is complete.

“We wanted to preserve the original details,” Jameson, 33, who works in private equity at the Blackstone Group says. “Otherwise, it might have been faster.”

Patricia, 36, says she keeps more toys for her son upstairs, and cycles them in and out of the playroom so he doesn’t get bored. The rug, which resembles a quaint little town with roads and parks, gets put away periodically, too, so he doesn’t tire of rolling his tiny cars across it.

“We have so many toys, my friends joke I should open my own drop-in play space,” she says…."