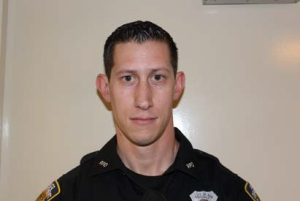 (PHOTO: Drug User or Abuser? Rye PD Officer Lansing Hinrichs is Going to Sniff You Out.)

Drug Recognition Expert (DRE) police officers have been trained to observe the signs of drug and/or alcohol impairment. DRE officers participate in training that has been approved by the National Highway Traffic Safety Administration (NHTSA) and the International Association of Chiefs of Police (IACP). A DRE is also skilled in detecting and identifying persons under the influence of drugs and in identifying the category or categories of drugs causing the impairment.

DREs are utilized by law enforcement officials when a driver appears to be impaired, but police have ruled out alcohol as the cause of impairment. DREs receive extensive training, sponsored by the Governor’s Traffic Safety Committee, which allows them to observe and document indicators of impairment within different drug categories including illicit and prescription drugs.

As part of their intensive training, DRE graduates must successfully complete a three-phased program prior to being certified. The first phase consists of a two-day curriculum followed by a certification test to advance to the next phase of the program. The second phase, which encompasses seventy-two classroom hours and results in a final knowledge exam. The third phase, a comprehensive certification training program, requires participants to observe and identify three out of the seven drug categories and take a four to five- hour final knowledge exam to successfully comply with DRE regulations.

Commissioner Michael C. Corcoran, Jr, commended Officer Hinrichs by stating, “Lance is a rising star in the Rye Police Department. He is an extremely intelligent, active and committed police officer. He completed this rigorous program and is now one of only nine officers throughout Westchester and one of less than 255 throughout the entire state of New York to receive the highly specialized designation of Drug Recognition Expert (DRE). This designation is testament of his unwavering professionalism and is a tremendous accomplishment considering there are over 66,000 law enforcement officers throughout the entire state.

We are extremely proud of Lance on earning this highly coveted certification. He joins Officer Jon Klein who became Rye’s first DRE in 2017. Hinrichs’ certification will benefit not only Rye but our law enforcement partners throughout the region and further efforts to keep all of us safe from the dangers caused by drug and alcohol impairment.”