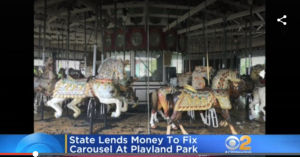 A collection of classic Playland horses, part of the carousel building that was damaged in a 2017 fire, will ride again. A $450K payment from insurance will put the horses and carousel back in action by 2020.

CBS New York had the details:

The hand-carved horses were damaged and the carousel building was at risk of collapse.

But now, the funding pieces are in place to get the carousel turning once more.

Playland has settled in for a long winter’s nap, but some are already looking ahead to spring – of 2020. That’s when a park treasure is set to return.

“It was hard to not start crying. To be honest with you it was kind of a shock,” said Deirdre Curran of Friends of Playland.

Curran says a piece of her heart and history reside at Playland. She worked a summer in the 1980’s operating the carousel.

It’s difficult for her to see the charred building and the mechanical works that turned the ride ruined by flames, smoke and water.

The building caught fire in July 2017 and damage was far more significant than it first appeared.

The 66 intricately hand-carved horses were singed and soaked.

Insurance is paying for their meticulous restoration by experts."