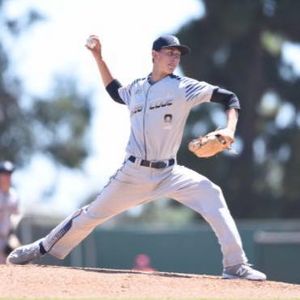 Rye's own George Kirby, after passing up the Mets back in 2016 and staying at Elon, has been drafted by the Seattle Mariners.

Details from the Spokeman Review, and congrats to Kirby!:

The Mariners, it appears, have found a pitcher-perfect fit for their “Control the Zone” strategy.

With the 20th pick in Monday’s MLB draft, Seattle selected Elon University pitcher George Kirby, who led all NCAA Division I pitchers with a dazzling 17.83 strikeout-to-walk ratio this year — 107 strikeouts to six walks in 88.1 innings pitched.

“It kind of punches you in the face when you look at it,” Mariners scouting director Scott Hunter said of the strikeout-to-walk ratio. “You actually have to ask if it’s real. And with all of our different technology and our analysts and all the different video stuff – it is (real).”

It’s the second year in a row Seattle has used its first-round pick on a right-handed power arm from a small college. And Hunter said Kirby has comparable qualities to Logan Gilbert, the Mariners’ 2018 first-round pick out of Stetson University whose promising start to his pro career has him on a fast track through the minor leagues.

“Obviously very excited to add a college pitcher we felt was one of the top four or five arms in the country. He fits everything we value here,” Hunter said.

“I don’t want to say George Kirby was the same as Logan Gilbert,” Hunter added, “but some of our information, our data, and some of the different things we’re doing from not only a scouting look but all the different technology – there was a lot of comparisons to Logan. This was a huge team effort.”

Kirby, 21, from Rye, New York, was 8-2 with a 2.75 ERA in 14 starts as a junior for Elon this year, earning the Colonial Athletic Association Pitcher of the Year award.

Kirby, 6-feet-4 and 210 pounds, features a four-pitch repertoire: a fastball that sits 92-94 mph, a slider, a curveball and a changeup.

He initially attracted attention from Devitt Moore, the Mariners’ Northeast scouting supervisor, while pitching in the prestigious Cape Cod Summer League last year. Moore called Hunter to tell him about a big right-hander from Elon, and Hunter’s first question was: “All right, where’s Elon?”"

Facebook
Twitter
Email
Previous articleMr. Met & Other Write-Ins for School Board
Next articleZahm Opinion: We Need a More Responsible School Bond – So Vote NO Tuesday