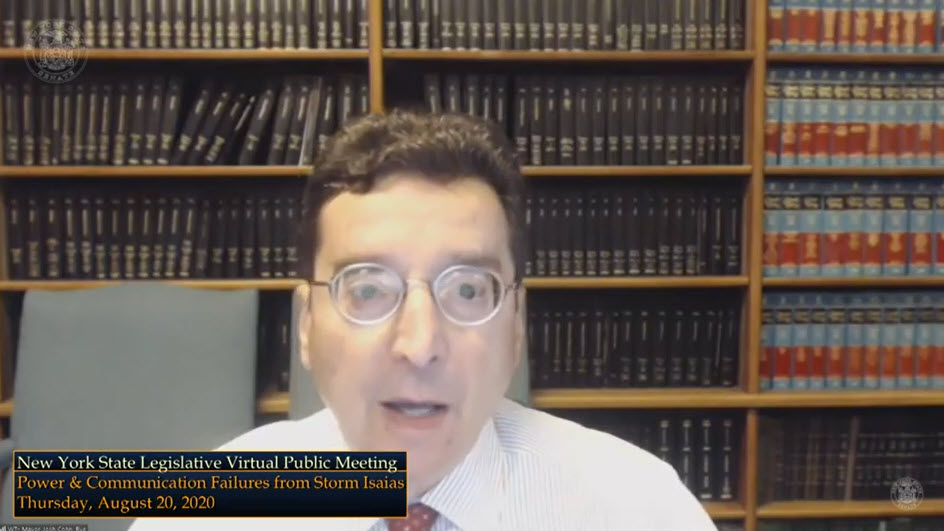 Rye Mayor Josh Cohn gave MyRye.com and its readers his Con Ed / Tropical Storm Isaias postmortem last week. But he also delivered blistering testimony to the New York State legislature, along with local officials from across the area.

Watch, or read the transcript, of Cohn (if you are watching the video, Cohn starts at 11:19:52 (hours/minutes/seconds)).

Testimony of Josh Cohn, Mayor of the City of Rye, Before the Joint Public Legislative Hearing on Power and Communications Failures from Tropical Storm Isaias

Hon. Chairs and Ladies and Gentlemen of the Senate and the Assembly, I am grateful for the opportunity to speak this evening with respect to Con Ed’s performance in relation to Isaias.

I am Mayor of the Westchester City of Rye. I speak to you today to discharge my responsibility to the residents of Rye to do all I can to protect them from dangerous, prolonged power outages.

In March of 2018, with two months as mayor under my belt, I found myself trying to help my city through more than a week of bitter days after Winter Storms Riley and Quinn. Though I was on the phone and in the street all day every day, there was little I could do to shorten that trial by cold and darkness. I resolved to work to make things better by participating, as a member of the Executive Committee, in the United Westchester investigatory effort led by Assemblyman Buchwald and County Executive Latimer. That effort led to a near 50-page report. I also submitted testimony in the Public Service Commission hearing that followed.

After that, there seemed nothing more as a mayor I could do. My hope was that others, the Public Service Commission (which published its own report), the state legislature, someone, was making sure that the message of Riley and Quinn, which was also the message of Hurricanes Sandy and Irene, would be heard and understood by Con Ed. That was not to be.

Immediately after Isaias, 40 percent of Rye homes were without power. It took 8 days to get everyone’s lights back on, this time during a heat wave.

In so many ways this was a repeat of the Riley and Quinn experience. Con Ed had failed to prepare, again claiming that was because the storm did not follow the

track the Con Ed meteorologist had predicted. After the storm, days went by with few Con Ed repair resources in sight. This ineffectual Con Ed response gradually took on meaning as mutual aid workers arrived. A “fog of war” mentality seemed to prevail as Con Ed struggled to develop accurate damage information and strategize repairs. One of our critical institutions, a nursing home with a failing generator, was found not to be on Con Ed’s critical institution list, the elderly and disabled were left to fend for themselves, inaccurate restoration times were published by Con Ed and Con Ed failed in customer communication.

As in Riley and Quinn, City staff and I did all we could to try to help (along with some very well-meaning Con Ed staffers), and in so doing we were obliged to tie up much of our small City’s governmental resources for nearly two weeks. But despite our best efforts, even before the storm hit, the die had been irrevocably cast by Con Ed to the detriment of its customers.

How so, how was that die cast? By Con Ed failing to respond to many of the post- Riley and Quinn recommendations, ranging from those challenging over-reliance on variable weather forecasts and over-dependence on mutual aid in storms of regional impact to those urging better support for vulnerable customers, including those who do not rely on electrical life support equipment.

Simply put, Con Ed cast that die by failing to have a storm outage response plan capable of producing a timely response to a regional storm. This was not the Con Ed weatherman’s fault. This was a Con Ed management failure.

I don’t appear before you today with the answer. Rye’s City Council likely would endorse the Supervisor Puglisi – Mayor Pugh letter to the Governor asking that Con Ed be replaced. But if you and your staffs can find a better way, so be it. Please, dig deep within your collective resources and choose remedies that go to the heart of the matter. This is not the time for incremental fixes. This is not the time to accept utility failure as a new norm.

Con Ed’s persistent misbehavior presents an extreme problem that requires a powerful remedy.  Please, ladies and gentlemen, take this matter up with strength and seriousness and return to your constituents with a utility that will not gamble on weather forecasts, that will recognize a pre-eminent obligation to keep the lights on through storms or rekindle them promptly after, that will build a resilient power system (including strategic undergounding, where practicable), that will communicate accurately, that will find ways to help and protect the most vulnerable of its customers and that can manage, for goodness sake, to establish more than 2 ice distribution points in a county of a million people.

The human costs of power failures like the one we just experienced are great. So are the financial costs. Please, it is now up to you, ladies and gentlemen, and the Governor. You have the ability. Now, please have the will. Let’s please make it so we do not have to do this again.