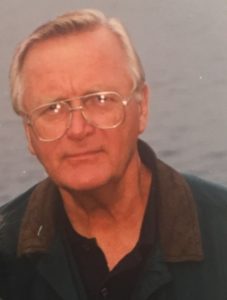 George Liney passed away at home on Sunday, January 3rd, 2021. He was 89 years old. George was born in New York City to Hildur Larsen and George Liney on September 25th, 1931. He was their only son. Following his father’s death, George moved to Mandal, Norway, where he lived in a small coastal home among his extended family until 1951. At 20 years old, George returned to New York with nine dollars in his pocket and a rudimentary knowledge of English. With his unparalleled strength, dedication, and tenacious work ethic, he acquired fluency in English, graduating from the University of Connecticut with a Bachelor’s degree in Economics in 1954. That same year, he was drafted into the U.S. Army, serving for two years in Heidelberg, Germany.

Following his military service, George returned to school, earning his MBA from The University of Michigan’s School of Business in 1957. In the subsequent year, George met and married his wife Pamela Valerie Jones in Forest Hills, Queens, at The Church in the Gardens in 1958. In Manhasset, and later, in Rye, NY, George and Pamela raised three children, Graham, Jill, and Janice, whom he fervently cherished, supported, and guided. Eventually, he would do the same for his eight grandchildren. He was an especially dedicated husband, father, and grandfather.

While studying for his CPA, George began his long and successful career in finance with the accounting firm Ernst and Ernst, eventually rising to influential positions in two major corporations. George ended his varied and interesting international career with Synthelabo-Sanofi of Paris, France, after 13 years as Vice President of Finance at their U.S. division in Tarrytown, NY.

George was a member of Shenorock Shore Club in Rye, NY, where he shared 47 years of laughter, great food, and recreation on “the Sound” with his extended family and dear friends. Having grown up in a small fishing town on Norway’s Southern coast, George carried his love and reverence of the sea with him throughout his life, exploring the great fishing grounds of the Long Island Sound, Montauk, NY, and New England. Over the past 25 years, George spent most of his summers on his beloved Block Island, RI, where he and his wife Pamela built a house of their own, and treasured clamming and fishing with their extended family and close friends. George passed his love and passion for the sea onto all of his children and grandchildren, as well as his son-in-law, Ed, who, along with his eldest grandson Brandon, allowed George to continue fishing into his old age. George was a skilled seaman, and an esteemed captain of his family, fair and true.

George Liney loved his family fiercely, and he beamed with pride in all of its members. He was also a masterful story-teller, always capturing the attention of everyone in his presence, and imparting wisdom and amusement upon his listeners with every vibrant tale he recounted. George was always sure to emphasize the importance of cherishing family, bestowing his knowledge of the family’s lineage upon his children and grandchildren through both oral and written family histories. His sage and often hilarious stories of his life’s experiences live on in his children and grandchildren.

George acted as a “gold-standard” role model, showing all who knew him what it meant to be grateful, resilient, and virtuous, all in simultaneous. George deeply appreciated and enjoyed the simple pleasures of life. He lived each day with integrity, charisma, humor, and compassion for others, making everyone he met feel luckier for it. He exemplified genuine strength and perseverance in the face of adversity, all while maintaining a brave face. George devoted the latter quarter of his life to instilling these qualities in his grandchildren, Brandon, Pilar, Olivia, Jessica, Esmé, Rhys, Amanda, and Hunter, in whom his prolific legacy will persist.

As a successful career professional; a skilled outdoorsman; a devoted family man and friend; and a learned student of life, George was fulfilled. He worked, loved, and lived profoundly. His life was full, and he was, and is, deeply beloved. George Liney’s rich and enormous legacy continues to live in every person and thing that he touched, or, in his case, firmly grasped. Fair winds and following seas, skipper. “O Captain, my Captain!”